Minuscule traces of iodine-131 were found in seven areas including Seoul, while traces of cesium-134 and cesium-137 were detected in five others, according to the Korea Institute of Nuclear Safety. 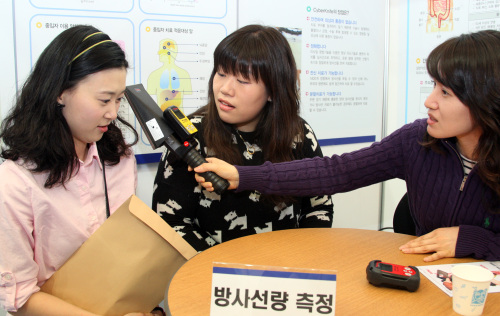 A woman receives a radioactivity check during a health fair in Ulsan on Sunday. (Yonhap News)
“The concentration levels of iodine went down compared to rain water collected the previous day,” a KINS official said.

Iodine and cesium are by-products of nuclear fission that apparently come from Japan’s troubled nuclear power plant in Fukushima where the March 11 earthquake and tsunami nearly destroyed the plant’s containment system.

The highest amount of radiation detected accounted for less than 0.01 percent of annual dose for humans or 1 millisievert, agency officials said.