[ The Korea Herald – Send E-mail ]
Boy finds father he didn’t know he had
By 천성우
Published : Apr 7, 2011 - 18:03
Updated : Apr 7, 2011 - 18:03
CHICAGO ― As drums pulsed and a singer wailed, Chelot Pierre danced. Dressed in white, a red sash around his waist, the young man glided about the room with serpentine grace. His arms waved gently, evoking the ocean lapping at his Caribbean homeland. His face, marked by a faint scar on his forehead, was serene.

Anthony Bradford watched from the front row. He could scarcely believe 14 years had passed since he first saw Chelot dance.

Bradford was a Peace Corps volunteer from Chicago’s South Side when he met Chelot on an Haitian street. He ended up caring for him like a son, and even tried to adopt him until the expense and bureaucracy foiled his dream.

His efforts in the years that followed were no more successful until the day he received an astonishing message on his answering machine.

“We both felt that same energy, that same level of commitment,” Bradford said.

Chelot (pronounced “SHAY-low”) was 7 or 8 on the night in 1997 when everything changed. He was playing hide and seek in the street and he didn’t see Bradford’s bicycle until he ran into it.

His face smashed into the handlebars, opening an enormous gash on his forehead. As he stumbled away, he fell again, hitting his head on a concrete curb.

Several men surrounded Bradford, an amiable Peace Corps volunteer who had been riding home from a meeting. He wrapped his T-shirt around Chelot’s bleeding head. He walked the boy to a nearby medical clinic for stitches, then took him home.

Two days later, Chelot appeared at the gate, clutching a plastic bag that held a T-shirt, a pair of shorts and half a bar of soap. “What’s wrong?” Bradford asked. “Why are you crying?”

Chelot was an orphan. He never knew his biological father, and a fever claimed his mother when he was 2. A family friend raised him alongside her own two boys.

After the American collided with Chelot, the woman taking care of him saw a big one.

She told Chelot to leave. She wasn’t angry, she said, and Chelot hadn’t done anything wrong. But he had to go. “Blan” ― Creole slang for foreigner ― would be his father now.

Bradford, single, childless and by no means rich, was stunned. He took the boy to the neighbors, a police station and the local priest, but received the same answer.

He soon thought of Chelot as a son. They’d go to neighborhood parties together, where Bradford would watch Chelot dance to the Konpa music pumping from a boom box.

Bradford extended his two-year Peace Corps stint by 12 months to stay with Chelot and pursue his adoption, but it became too expensive.

Bradford found a spot for him at the St. Joseph’s Home for Boys, an orphanage in Port-au-Prince. He vowed to return for Chelot.

Chelot easily adapted to life at St. Joseph’s, largely because of its dance company. He had natural talent, and St. Joseph’s troupe offered advanced training. 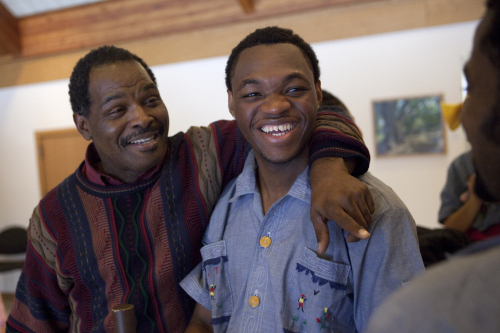 Chelot Pierre (right) with his surrogate father, Anthony Bradford, in Madison, Wisconsin on Jan. 29. (Chicago Tribune/MCT)
Bradford stayed in touch with Chelot through email and phone calls, and twice he came for a visit. But his own life had become more complicated with marriage and a teaching job, and he didn’t have the money to pursue the adoption all-out.

Chelot was worried, too. He thought he was getting too old for St. Joseph’s and would soon be put on the street to hustle for his daily bread (St. Joseph’s officials, though, say boys stay until they are 21, and most are then employed by the orphanage).

When he confessed his concern to another boy, the friend suggested an audacious plan: If Bradford couldn’t come for him, he should go to Bradford.

Chelot waited for the final stop of a spring tour. When the rest of the boys went shopping, he remained in the Boston church rectory where they were staying, saying he wanted to catch up on email. He waited a few minutes, then dashed to the train station.

After two days on the rails, he pulled into Union Station. He didn’t have Bradford’s phone number, so he called everyone by that name in the Chicago phone book.

It took Bradford a day to get the message. He and his wife had moved to Macomb, about 240 miles away, a few months earlier so he could pursue a master’s degree in political science. They kept their Chicago apartment, though, and Bradford’s wife, Ge’ylah Jones Bradford, just happened to be checking the answering machine when she heard Chelot’s call.

Bradford dispatched his Chicago friends and relatives to look for Chelot, but they couldn’t find him. The Bradfords then headed to the city and scoured the station, only to hit the same dead end.

Chelot had been at the station only a couple of days when a police officer noticed him and had a homeless shelter pick him up.

There, Chelot emailed his friend from the orphanage, who suggested that Chelot call a Chicago man who had met some of the boys at a dance festival. He did, and soon the man arrived to whisk Chelot to his South Side house.

The man told him that continuing his journey would be unwise. It would be safest, he said, if Chelot contacted no one.

Chelot, frightened and short of options, complied. Despite a stream of pleading emails from Bradford, he remained silent.

Several tense months passed until one day, Jones Bradford grew weary of seeing her husband mope at the computer. “Move out of the way,” she said. “I’m going to type the message.”

Jones Bradford had met Chelot while accompanying Bradford on a trip to Haiti. Her email was stern, direct, even threatening ― the tone of a mother who had had enough. The next day, a reply came back.

Much has changed since that day. Bradford and his wife split up, and in 2008 he moved back to Chicago. Chelot soon followed, enrolling in the charter high school where Bradford taught.