[ The Korea Herald – Send E-mail ]
Immigrant boat capsizes off Italy; 250 missing
By 이윤주
Published : Apr 7, 2011 - 19:53
Updated : Apr 7, 2011 - 19:53
ROME (AP) ― A boat carrying as many as 300 migrants from Libya capsized in rough seas off the Italian coast early Wednesday, leaving 250 people unaccounted for. Survivors told of desperately trying to reach rescue boats as those unable to swim screamed in the darkness and pulled one another under the water.

If the number of dead is confirmed, it would prove the deadliest crossing to Italy in recent memory, and the worst refugee disaster since a wave of migrants began arriving on Italian shores in January following popular revolts in Tunisia, Egypt and Libya.

The Italian coast guard rescued 48 people Wednesday and a fishing boat picked up another three after the boat began taking on water shortly after 1 a.m.

Survivors told The International Organization for Migration that they swam toward approaching coast guard vessels, but many others drowned because they couldn’t swim or were dragged back by screaming fellow passengers.

Simona Moscarelli, the IOM’s Italy representative, told Sky TG24 that many survivors had their pants torn off as they tried to swim toward rescue boats, as those left behind grabbed onto anything they could in a desperate struggle to stay afloat.

The commander of a fishing boat that rescued three people described what he said was a terrifying scene.

“What we saw was incredible: Heads were coming in and out (of the water) and people were screaming,” Francesco Rifiorito told ANSA. “We did all we could.” 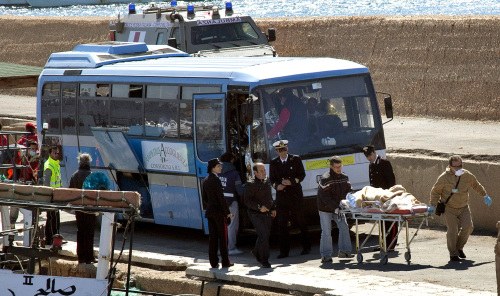 The incident occurred about 64.37 kilometers off the coast of Lampedusa, an island closer to North Africa than mainland Italy.

Carosia said the boat had sailed from Libya and likely been at sea for around two days. He said about 200 people were believed to be on board, although the IOM and survivors put the number of passengers at 300.

The IOM said the migrants and asylum seekers were from Bangladesh, Chad, Ivory Coast, Nigeria, Somalia and Sudan. Among them there were 5 children and 40 women, of whom only two survived.

Antonio Guterres, the U.N. high commissioner for refugees, said many of those on board had sought asylum in Libya, only to be forced to flee by the fighting.

“These people were refugees twice,” he said. “I appeal to all those patrolling the Mediterranean Sea to do everything they can to help vessels in distress.”

Upon arriving in Lampedusa Wednesday morning, survivors were offered blankets, warm drinks and food. Officials who provided first aid said many were in a state of shock and suffering from hypothermia.

“One man told me he had lost his 1-year-old son,” said Moscarelli of IOM. “One of the two surviving women told me how she had lost her husband.”

Another relief official who assisted them, Cono Galipo, said many didn’t know where they were, or where they had come from. “I’m under the impression some still don’t know whether they are dead or alive,” she added.

ANSA and LaPresse news agencies said at least 20 bodies had been seen in the water, including those of women and children.

The coast guard said it was unclear what happened, and that the incident was being investigated.

More than 20,000 people ― mostly Tunisians ― have arrived from North Africa on Italy’s shores, fleeing the turmoil that has engulfed the region. Many leave from Zarzis, Djerba and Sfax, all in Tunisia, IOM said.

On Wednesday, the U.N. refugee agency’s goodwill ambassador Angelina Jolie was in Tunisia, where she met refugees from Libya. In a statement, she said she was “deeply saddened” by the shipwreck.

“It is all the more devastating knowing that children were on board,” she said.

Italy has pressed Tunisia to step up patrols of its coasts and to take back migrants who make it to Italy. The two countries struck a deal Tuesday, with Tunis agreeing to the repatriation of new arrivals and Rome supplying equipment and other assistance to crack down on smuggling rings. Italy also agreed to issue short-term residency papers for 20,000 illegal immigrants already here.

But Tunisia’s state news agency, citing the Interior Ministry, reported Wednesday that the government opposes any “collective repatriation” of Tunisian nationals from Lampedusa.

Tunisian officials took that stance during talks with Italy over the matter, notably during a rapid visit by Italian Prime Minister Silvio Berlusconi to Tunisia on Monday, the TAP news agency reported.