This is the first of a three-part article on medical tourism in Gangnam-gu, southern Seoul. ― Ed.

It was a brief stay of less than six hours, but enough to receive laser wrinkle-removal thanks to several online consultations while in the U.S.

After the treatment, she went straight to the airport.

“There are a lot of Chinese people who are interested in plastic surgery and skincare clinics in Korea. I also learned about it from a Chinese patient who was treated in Seoul,” Cheng, 45, said in an email.

“I’m very satisfied with the outcome.” 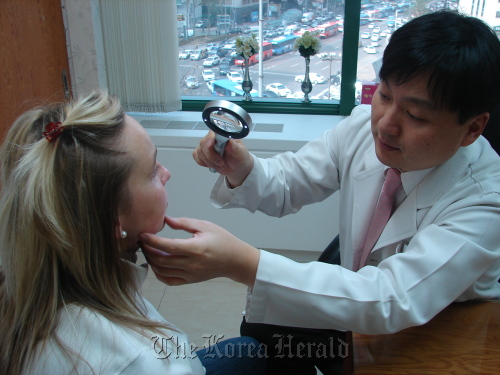 A foreign patient receives a consultation at Arumdaun Nara Beauty Clinic in southern Seoul. (The Korea Herald)
The growing popularity of K-pop in Asia, in particular, has boosted the numbers of those who seek plastic surgery and other aesthetic treatments.

And many of them are flocking to Gangnam-gu, southern Seoul, where more than half the plastic surgery and skincare clinics of Seoul are located.

In addition to its abundant shopping and fashion attractions, the road stretching from Sinsa-dong to Apgujeong-dong is called the “beauty belt” accommodating 430 clinics within the district.

Cheng also received treatment in the Arumdaun Nara Beauty Clinic, a Gangnam clinic which has seen a 20 percent increase in foreign patients every year.

“Some 200 foreign patients visit the clinic in a month. Affected by the Korean Wave in Asia, most of them are Japanese and Chinese people. There are a growing number of visitors from Central Asia and Eastern Europe as well,” said Lee Sang-jun, the clinic’s chairman.

“Young people prefer to have a major facial lift, while business travelers favor anti-aging treatment that little affects their daily activities,” he added.

A couple from Kazakhstan also received removal surgery for bags under their eyes at the clinic.

“We were a little worried before the surgery. But coordinators at the clinic helped us a lot and we feel great now after the treatment,” said the husband, an eye doctor.

Lee said “trust-building” is the key to treatment of foreign patients.

“Other than medical technique, which is the very basic thing, we try to relieve concerns of foreign patients in the whole process of procedures here,” said Lee.

Like major medical institutions in Korea, the clinic has participated in the Ministry of Health and Welfare’s pilot program “U-Health,” which offers a variety of medical services before and after the treatment both for domestic and overseas patients.

The language issue may be the most important concern when a foreign patient considers visiting Korea for medical purposes.

In an effort to better help foreign visitors, Gangnam-gu Office also dispatches its 47 special coordinators when there is a request from a clinic within the district.

One of them is Seo Do-young who has worked at the district’s community health center since last May.

“We try to assist foreign patients from their arrival here to departure to their home country. After the medical treatment, we sometimes help them with sightseeing and shopping in the city,” said Seo, who studied the Chinese language and medical tourism in China.

“Chinese patients show trust with the quality of Korean medical techniques. Their concerns are more about cultural differences such as food. We try to make them feel comfortable,” she said.

Still, most of the clinic’s clientele are overseas Koreans. But more Japanese and Chinese patients are visiting the clinic, she said.

“Japanese patients are very careful. It felt rewarding when a Japanese mother who was treated at our clinic visited again together with her daughter,” she said.

“Amid an aesthetic boom among foreign visitors here, it would not be easy for them to find quality institutions. For them, the Gangnam-gu Office’s website offers a useful tip,” she added.

According to Cho, who is also a member of a Gangnam hospitals’ association targeting foreign patients, the district office introduces a list of quality clinics on its multi-language website at http://global.gangnam.go.kr.