But when he looked on Wikipedia he was disappointed to find a dearth of information about it. Major authors were overlooked: Gong Ji-young’s page was a 60-word stub; Park Wan-suh had no page at all.

That’s a disastrous situation in an age when if something isn’t on Wikipedia it doesn’t exist.

“Suppose you were online looking for literature,” he explains. “The first thing that would happen is that you would not find any literature on any Web search.”

That could mean losing potential readers to writers from other countries.

“If you read Murakami and you go to the Wikipedia there’s a beautiful page with Japanese literature divided into eras with links to pages with photos with all of this stuff. That’s not there yet for Korea.”

What Montgomery did find was a page on Korean literature in general, linked to a few others, many of which were marked for deletion because they didn’t meet the site’s minimum requirements.

Using this page as a starting point and Montgomery collated offline information to create and expand pages for the biggest authors and some of the country’s literature awards.

Although some users have been following up on his posts and improving them, the pages still need more depth of information and internet links. What that requires is people with language expertise ― perhaps Koreans who know about Korean literature but were daunted by the process of creating a page.

“The getting and curating of information is much more difficult because my Korean is poor,” he says. “And it’s just not a one person job.” 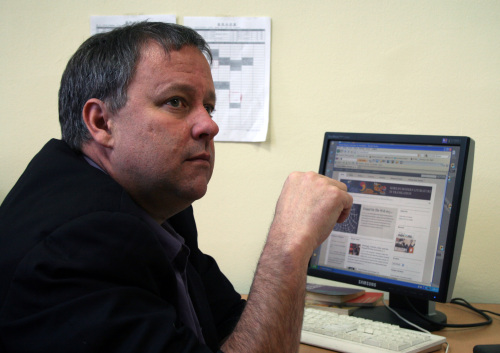 Charles Montgomery (Paul Kerry/The Korea Herald)
He says he has received help from Minmusa, and he has started to contact authors about getting pictures, but it’s his hope that translation students take up the baton.

Elsewhere he thinks there are things the government could do to help Korean writers improve their online profile, such as Romanization ― an apparent source of frustration for him.

“For any given Korean author you are going to have to know enough Romanization to search three different names,” he points out.

“Japan managed to get Yuko Mishima to have the same name no matter who published it.”

The current situation means that people who become interested in an author might not be able to find all of their work, or information about them. Montgomery says this kind of difficulty should be removed if Korean literature is to become as popular as he believes it could.

“I think Korean literature is at that point, or has that opportunity. It is not inevitable, but it’s possible if the right things can be done, and one of the things about the Wikipedia project is just so that people can find things.”

Montgomery added that too much focus had been put in the past on academic tomes that only have a very narrow academic market, and there was a tendency to focus on retranslating the same thing has held back the spread of information.

He was puzzled by a five-language version of “Buckwheat Season,” which he says had already been translated dozens of times.

“My marketing brain was like ‘but no one is going to buy this because it is in five languages, so even if they speak one of those, four-fifths of the book is going to be no use to them.’”

“But I think the publishers and the translators are starting to make much better choices from a marketing perspective.”

He gives Shin Kyoung-sook’s “Please Look After Mom” ― which was recently recommended by Oprah Winfrey’s O Magazine ― as an example.

“They are getting much better at figuring out where the niches are overseas and how to fill them,” he says.

Aside from his Wikipedia project, Montgomery’s blog ― www.ktlit.com, referring to Korean translated literature ― has gained something of a following.

Started simply as a way of motivating himself to keep reading, Montgomery seems aware of its new potential as a stepping stone for readers new to Korean fiction. He says he makes a point of listing recommendations for beginners on his blog whenever he gets some media exposure.

But he has his eye on a time when he won’t want to publish five times a week.

“The blog is useful and it connects people,” he says. “But the Wikipedia, in the long term its much more valuable.”