Read from within the audience, a letter begins: “Dear ….”

Following hesitantly, as the 20-year-old struggles to find the term for someone who should be so close, but is as yet unknown, comes the title ― “mother.”

Written, adapted and performed by Amy Mihyang, “between” explores growing up as a Korean-American adoptee.

“I wanted to create a play that explored the complex myriad of stories within Korean-American adoption process, particularly from the birthmother and adoptee perspectives,” Miyhang explained.

Playing a range of characters ― all inspired by real people ― the show is an intelligent, humorous and compassionate journey into an often misunderstood issue.

An adoptee herself, who reunited with her birth family six years ago, it comments on themes especially poignant for the actor and writer, and ultimately asks: “Do we need to know where we came from in order to know where we’re going?”

Set on a flight from New York, where Mihyang grew up, to Incheon, where a first meeting with her birth parents will take place, the production boldly confronts the complex array of emotions felt by both adoptees and the women who felt they had no choice but to give their child up.

Mihyang adeptly embraces her characters ― from a confused young girl, desperate to assimilate in America, to a distraught woman confronting a forbidden pregnancy in Korea ― with heart-felt conviction, shifting the audience from empathy-laden sadness to laughter with ease.

Originating as Mihyang’s thesis for her undergraduate degree at Hofstra University, the production was first staged at the Edinburgh Festival Fringe in 2006.

Although the play has evolved over time, as she encountered more stories during her research, Mihyang said she has tried to maintain a focus on the dichotomy of a unique and positive experience contrasted with a sense of loss.

The version staged here, in association with the Seoul Players, is the play’s Asian debut and the first bi-lingual production, allowing Mihyang to use the Korean language she has been studying since she moved here two years ago to work as an English teacher and voice coach. 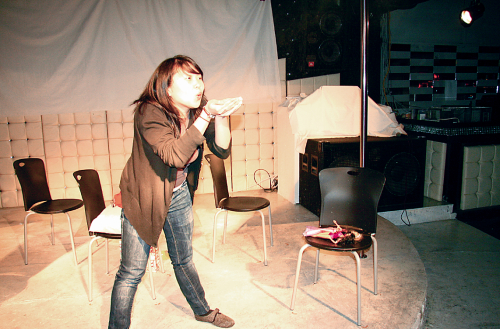 Amy Mihyang in a scene from “between” (Adam Lofbomm)
She has also been involved in theater here and last appeared in the Seoul Players’ “The 26th Annual Putnam County Spelling Bee” in 2010 as Marcy Park.

Sharing the story with Koreans, she said, will be a very powerful experience for her. Particularly as her birth parents will be coming to watch ― “It’s important for them to see it.”

She said the project has taught her a lot, and she is particularly excited to get feedback here. “It’s always great when adoptees are able to see the show, many of them have told me that seeing something similar to their own experience on stage validates something for them,” she said.

The production is both entertaining and thought-provoking, but it also speaks to the wider political problems surrounding adoption in Korea, one of the last remaining developed countries to continue international adoption.

“It’s incredibly gratifying to work on a performance project that stems from storytelling, activism and awareness,” she said.

Miyhang believes support for Korean adoptees ― especially in terms of post-adoption services for families ― is currently not sufficient. Although new Korean legislation is in the pipeline, which will make it easier for adoptees to access information and offer support for searches, only about 2 percent are successfully reunited.

“This is because we lack support in all areas of search: culturally, emotionally, legally,” she said.

The proceeds from “between” will be donated to the Korean Unwed Mother’s and Families Association, an organization Mihyang volunteered for and is “deeply happy and honored” to be supporting. It is the only group solely created and run by unwed mothers and offers financial assistance, guidance, and other resources.

“Many of the adoptees who volunteer are like myself ― they have met their birthmothers and know how painful it was for them to lose their child and hide the shame of the loss for 20 plus years.”

The production is directed by Song Kim, a Korean-American raised in Portland, Oregon who has acted and directed theater in Portland, Los Angeles and now Seoul.