Nearby, a pink octopus lies dead in a pool of sea water, its tentacles wrapped around a crumpled sheet of corrugated aluminum that may have been a roof, a gate, a wall. Beside it, a broken tarmac road runs as far as the eye can see through fields of demolished houses and debris.

As post-tsunami Japan turns to the enormous task of putting towns like this back together, the sheer extent of the devastation wrought March 11 raises existential questions: Should the dozens of shattered communities along these shores be rebuilt at all? Can they be, when up to half their inhabitants are gone and survivors know it could happen again?

“The future is not bright,” Jin Sato, the 56-year-old mayor of Minamisanriku, says matter-of-factly.

The statistics for this town alone are grim. Of the 17,666 people who once lived here, at least 322 have been confirmed dead and thousands more have disappeared, still buried in the ruins or sucked out to sea. Another 9,325 lost their homes and live in 45 shelters, mostly schools, spread on hills along the bay.

The tsunami swept away nearly every business, every job. There is no electricity or running water, and very little fuel. Some 70 percent of Minamisanriku’s 5,574 houses were destroyed.

Inside a hilltop sports arena that serves as shelter, morgue and makeshift office, Sato sits red-eyed behind a small desk. “Whatever happens,” he says, “we’re going to need a lot of help.”

Minamisanriku has long been a small blue-collar fishing town, a place where hardy residents in rubber boots fished the chilly sea, farmed seaweed and sold octopus and oysters.

A collection of villages lining coves along a C-shaped bay, it was scenic and peaceful. The website for the Hotel Kanyo ― damaged but still standing ― shows visitors dipping in hot springs and snapping pictures of seagulls from balconies overlooking the Pacific Ocean. 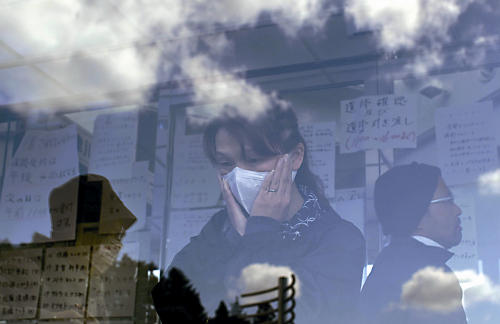 A woman reads a list which describes the dead for families searching for missing loved ones, posted at a shelter in the earthquake- and tsunami-destroyed town of Minamisanriku, northeastern Japan. (AP-Yonhap News) 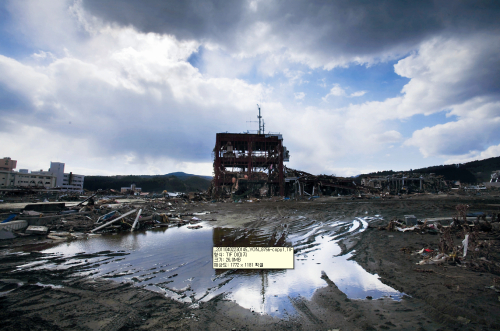 The gutted Disaster Emergency Center in the earthquake- and tsunami-destroyed town of Minamisanriku, northeastern Japan. (AP-Yonhap News)
On March 11, two days after an earthquake shook buildings from here to Tokyo but caused no major damage, Sato was talking to staff at City Hall about the need to boost disaster preparedness. As he spoke, one of the strongest quakes ever recorded rocked the Japanese archipelago at 2:46 p.m., triggering tsunami sirens that began howling across town.

People hurried to designated hilltop refuges, and Sato scrambled atop a government disaster readiness center next door. Half an hour later, he watched in awe as the thunderous wave surged over a sea wall in the harbor, kicking up plumes of mist and dust.

Sato clung precariously to a steel railing on the disaster center’s rooftop as ice cold waves washed repeatedly over it. About 30 people had fled to the roof with him; some 20 were swept away.

Sato and the other survivors spent a shivering night atop the three-story building, which had been reduced to a skeleton of itself, its walls torn completely off. The next day, he climbed down to the ground on a chaotic tangle of fishing nets that the tsunami had deposited over the building.

Most of the town was simply gone.

Two weeks later, Reiko Inaba was walking through ruins when she stumbled on two yellow crates filled with muddy photo albums, placed at the edge of a mountain of rubble by Japanese soldiers separating valuables from debris.

There were pictures of newborn babies, of school classes and laughing children. There were wedding photos covered in dirt and grime. Were they alive? Dead?

She did not know.

Halfway through the crate, one photo caught Inaba’s eyes.

The 35-year-old retirement home worker brushed away the dirt covering it with a white mitten and was astounded by what she saw: a picture of her now 13-year-old son, Rukya, staring back at her.

Here, a mile from the spot on which her home once stood, by pure chance or persistence, she had come across four snapshots taken 10 years earlier. Two showed Rukya standing over a white birthday cake when he was three. The boy survived with the rest of the family.

“I had given up finding any of this,” Inaba said, clutching the water-ruined photos close to her breast. “We have nothing else left.”

Nothing, she said, equals this: one white kitten piggy bank with 500 yen ($6) inside it, a few bank statements, and the clothes on her back.

Other lives will never be put back together again.

At the entrance of the sports arena where the mayor is struggling to run the town, 60-year-old Sachiko Sato studied a list of names posted on a glass wall inside the door.

No. 104 was unknown, identified by his height, his weight and a black mole on his right shoulder.

No. 49 was identified but unclaimed: Kazuo Izawa.

Sato last saw him the day the tsunami struck. He had left home in a brown suit headed for the town council, where he worked. It was the final meeting of a session, and “he told me, ‘After it’s over, let’s meet for a drink,’” Sato recalled. “I told him, OK. I’ll see you later.”

Her husband was the pillar of the family and made all the decisions, she said. “Without him,” she added quietly, staring at the list, “I have no idea what we’ll do.”

On a hilltop across town, Reiko Sato stood in her doorway, looking down over Minamisanriku. She is one of the lucky ones: She lost no family, and her home was untouched. But just a few meters from her doorstep, the tsunami’s legacy begins.

Every day, she wakes up to the sound of military bulldozers reorganizing debris into separate mounds: piles of wood to be burned, piles of scrap metal to be hauled away. The four-story hospital where she worked as a nurse is one of the few buildings left standing, but she wonders if it will ever reopen.

With no stores stocked, she must line up at a nearby school-turned-shelter to get rations of miso soup and rice balls.

She gathers water for her family in plastic jugs.

“You cannot look at this and feel lucky,” she said. Her daughter pointed a tiny index finger repeatedly toward something rarely seen here before: a military helicopter circling the sky.

For decades, Japan’s youth have abandoned towns like this in favor of the urban bustle of glittering cities like Tokyo. In Minamisanriku, the population has remained approximately the same for the last half century.

Many younger people moved away long ago, said Toshiko Suda, 63, who ran a business selling seaweed. “Now their parents may follow.”

Suda’s children live in the nearest big city, Sendai, parts of which were also heavily damaged. She put her life into the business she started with her husband, 64-year-old Michio.

Now, the fishermen who brought them seaweed are missing, and the boats that once lined the harbor are gone. So is their house, their business and the fish shops across the street.

“We don’t want to leave,” Suda said. “But if nobody else comes back, we can’t stay. You cannot build a life by yourself.”

Elsewhere in the ruins, construction worker Kazuhiro Watanabe stood over the foundation of his home, trying to figure out where the things in it may have been swept to. Nobody will live in any part of Minamisanriku touched by the tsunami, he said.

“Maybe everyone will just move to the hills ― if they stay here at all,” he added. The town is still in shock, still mourning: “This is not the time to think about rebuilding.”

And first, some crucial questions must be answered: Should the entire town shift inland, high on the hills, safe from the waves? Is it humanly possible to protect against such a mighty force of nature?

Many here still remember the last tsunami that wrecked the town in 1960. Propelled across the ocean by a massive quake off Chile, that wave arrived at a height of nearly 2.4 meters and killed more than 40 people. The disaster prompted the town to stage annual tsunami drills and build a thick, one-story-high concrete sea wall, which Sato says contributed to a false sense of security.

This month’s tsunami was four or five times higher, Sato said. It easily toppled the breaker across the harbor, destroying about half of it.

“We understand now that our disaster plan was meaningless,” he said. “We must rethink everything.”

The town, Sato added, “will have to undergo a drastic change.”

For now, he has more immediate problems.

The homeless live just a few yards from his feet, sleeping in cardboard cubicles in the corridors. With no money and few belongings, they will need to be fed for months. Outside the shelter, they line up eagerly to sift through boxes of used clothes donated from private companies in Tokyo.

In Sato’s makeshift office, electricity company officials are studying maps, trying to figure out how and where to install mobile transformers. Firefighters are coordinating operations to recover bodies. Outside, American helicopters are landing on the lawn with boxes of food.

The prefectural government plans to erect thousands of prefabricated homes, the mayor says, but that is only a temporary solution.

“My concern is not whether we can rebuild,” Sato says. “We can rebuild everything in time. The question is whether people will do it here. I cannot decide whether they stay or go.”