Ko, who will be publishing his second Czech-language book next month, was specially invited by Jaroslav Olsa, Jr., Czech Republic Ambassador to Korea, to give a congratulatory speech.

“Ever since I went to a literary festival held in Prague (9 years ago),” Ko said, “I’ve been feeling as if Prague has been attached to my back.”

Ko said he has been especially moved by the life of Jan Neruda, one of the Czech writers featured in the newly-published book.

“Neruda was a journalist while he was alive and became a poet after he was buried,” Ko said.

“His spirit is here, so are the rest of the featured writers, as well as the one of Chilean poet Pablo Neruda, who changed his last name after Jan Neruda.”

Ko then recited a poem called “My Prague,” which he wrote for the event. 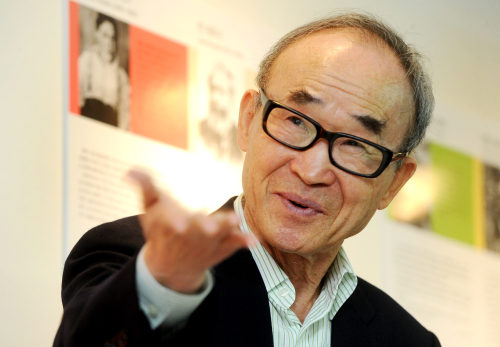 It was her who asked Ko to compose the piece for the event.

“Cities of the world are swelling by day by day,” the poem read. “This city cannot be swollen … it’s the place where hatred returns to the previous day of hatred. My Prague.”

Bozdechova has been involved with Ko’s upcoming Czech-language book. She said she made the upcoming book a “bilingual” edition for a reason.

“The book will have both Korean and Czech on the same page because it allows the dialogue between two cultures,” Bozdechova told The Korea Herald. “Even if I can’t read Korean, I can still feel its spirit as I go through both texts.”

Olsa, whose first official event in Korea was a recital of Ko’s poem in Czech, said literary interaction between Korea and his home country is important.

“The problem of Czech writers in Korea is the fact that nobody can read them,” Olsa said. “That is why the publication of such a book is important. There are plenty of (Czech) writers whose works have never been published in Korean.”

Ko Un will be visiting Prague next month to attend Prague Book Fair.