Shelvin Mack scored 24 points and Zach Hahn came up big off the bench, ending the warm-and-fuzzy story of this year’s tournament with a 70-62 victory over VCU in the Final Four on Saturday night. The victory sends Butler to the national title game for a second straight year and marks the first time since Duke in 1991 that the runner-up has returned to play for the championship.

“We’ve just got to be one shot better than last year,” coach Brad Stevens said.

“Last year we didn’t get it done, so that’s in the back of my mind,” Mack said. “My teammates did a great job of getting me the ball in position to have success.”

Hahn scored all eight of his points during a 90-second span in the second half that gave Butler control of the game for good.

VCU (28-12) sure didn’t look like a team critics dismissed as “unworthy” ― and a whole lot worse ― after it skidded into the NCAA tournament with five losses in its last eight games. But Butler’s unforgiving defense was too much for the Rams, only the third No. 11 seed to reach the Final Four.

“They played terrific all the way through, and we were fortunate to pull that one out,” Stevens said. 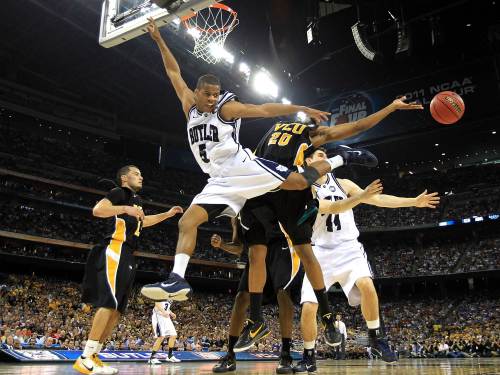 Butler’s Ronald Nored (5) loses the ball while driving to the basket against Virginia Commonwealth. (AFP-Yonhap News)
Jamie Skeen scored 27 and Brandon Burgess had 15, but the Rams made only eight 3-pointers and shot less than 40 percent from the field. Joey Rodriguez, the smooth point guard who dictates VCU’s offense, didn’t make a shot until 8:30 left in the game, finishing with only three points on 1-of-7 shooting.

The Bulldogs came within a bounce of winning it all last year only to see Gordon Hayward’s last-ditch, half-court heave carom off the rim and watch Duke celebrate the title with a 61-59 win. That the Bulldogs are playing for the title again is maybe even more impressive than the first trip, having lost Hayward, their leading scorer and rebounder, to the NBA lottery. Butler also lost two other players who made significant contributions, Willie Veasley and Avery Jukes.

But it took Butler a while to get to this point. When the Bulldogs skidded through four losses in five games, including three straight, midway through the Horizon League season, many wondered if they’d even make the tournament, forget about the Final Four.

But they’ve reeled off 14 straight wins now and are playing with the cool determination of guys that don’t want to be “first losers,” as Mack called them the other day, ever again.

Their defense during their winning streak has been just nasty, and it was what carried them again against the Rams.

After falling behind 34-28 at the half, the first time in the NCAA tournament they trailed at halftime, VCU reeled off five quick points to take a 35-34 lead. Then it was time for a little game of “Can you top this?” starring Hahn.

Skeen made a 3 and Hahn answered back with one that didn’t even rustle the strings of the net. Skeen converted a three-point play, and Hahn made another 3.