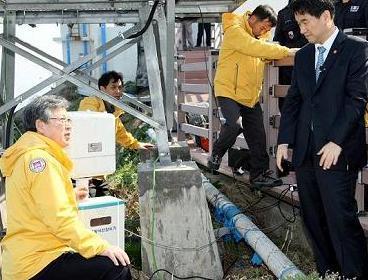 DAEJEON -- Radiation levels on South Korea's easternmost islets of Dokdo were far lower than those on the nearby island of Ulleung that is located further away from Japan grappling with a quake-hit atomic power plant, a state nuclear safety institute said Saturday.

South Korea set up radiation detection equipment on Dokdo, a cluster of islets off its east coast, on Friday amid rising fears of radioactive substances drifting from Japan's quake-hit Fukushima nuclear power plant. The move was also apparently aimed at demonstrating that Dokdo is South Korean territory as Japan renewed its claims over the islets.

The newly established equipment checks radiation levels on Dokdo every five minutes and sends the data to the state-run Korea Institute of Nuclear Safety based in the central city of Daejeon.

According to the agency, radioactive levels on Dokdo were measured at 99 nanosievert per hour as of 11:20 a.m., lower than 138 nanosieverts gauged at the same time on Ulleung, about 93 km northwest of Dokdo.

The agency said that the lower levels on Dokdo were believed to be because the device there was set up on a rock above ground while the equipment on Ulleung was installed on the ground that emits spontaneous radiation. (Yonhap News)