“The corresponding clause may be regarded neither ambiguous, nor unnecessarily discriminative against homosexual individuals,” said the court in its ruling on Thursday.

“Anyone with common sense may judge what the clause signifies by ‘homosexual relations and other sexual acts of sexual molestation,’ and abide by the contents.”

The court also said that the law, specially legislated to maintain order in the army, was justified in banning homosexuality for that specific reason and that the degree of restriction was not excessive, according to officials.

By this ruling, the Constitutional Court largely adhered to its past ruling made back in 2002, when it said that the stated punishment was in proportion to the military discipline which it aimed to protect.

The Supreme Court, too, ruled in 2008 that the respective legislative purposes of the criminal law and the military criminal law are to be differentiated, as the former was for the sake of individuals’ rights whereas the latter was for military discipline and national security.

Homosexuality within the army is thus subject to criminal punishment even when it is mutual as the stated crime does not require the complaint of the victim for indictment, according to the court.

The court’s decision, however, was in discord with the official recommendation of the National Human Rights Commission made last year, which regarded the clause as being vague and discriminative. 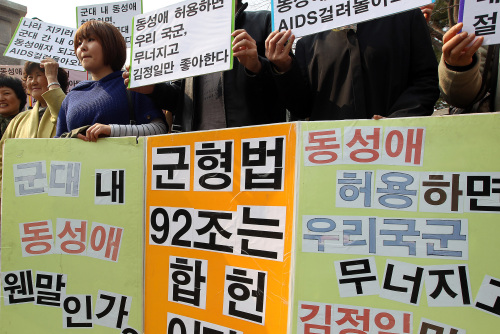 Civic group members hold a rally against homosexual relations in the military in front of the Constitutional Court on Thursday. (Yonhap News)
“The controversial clause is against the core spirit of the law, which is to protect the minority from discrimination and oppression,” said an official of the watchdog.

Those who promote the rights of homosexuals also rose up in opposition.

“The court seems to have spent the past few years in vain, making no progress at all,” said an official of the Solidarity for Lesbians, Gays, Bisexuals and Transgenders’ Human Rights.

“Even the judges who judged the clause as unconstitutional did so on the premise that homosexual relations caused the public’s aversion and disrupted military discipline.”

A local military court filed a petition to the Constitutional Court in 2008 to review clause 92 of the military criminal law which penalizes homosexual relations within the army.

A sergeant first class surnamed Gang was indicted for sexually molesting a colleague but the court questioned the legitimacy of the clause and handed the issue over for constitutional judgment.

While the case was pending in the Constitutional Court and faced controversy, the corresponding clause underwent a revision in 2009 and the maximum punishment for homosexuality was further reinforced from a year up to two years.

New articles were also added to penalize sexual violence, which was previously not regulated by the military criminal code.

According to a report by the NHRC, 176 cases in total were regulated by the disputed clause 92 in 2004-2007, of which three resulted in a prison sentence handed down on the accused.