At the Changwon Convention Center here, about 400 kilometers southeast of Seoul, NCsoft celebrated the first expansion in the Korea Baseball Organization since 1991.

You Young-koo, commissioner of the KBO, said, “A new history has been written” in South Korean baseball.

“During 30 years of professional baseball in the country, I don’t know how often we’ve been as happy as we are today,” You said.

NCsoft, known for its online role-playing game called “Lineage,” got the final stamp of approval from KBO owners on Tuesday. The company first expressed interest in founding a baseball team in December last year. 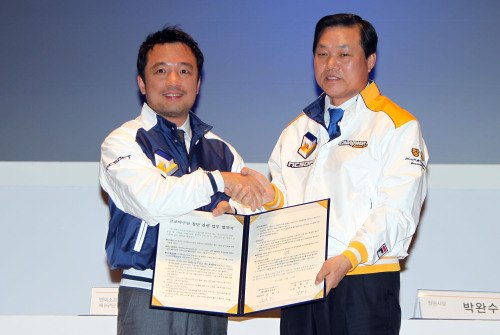 Kim Taek-jin (left), CEO of NCsoft, shakes hands with Changwon Mayor Park Wan-soo after signing an agreement to launch a new pro baseball team in the city on Thursday. (Yonhap News)
Presidents and owners of the league’s existing eight teams met over the ensuing months to discuss feasibility of the expansion and also ways to supply players for the new team. Aside from NCsoft, two other, unidentified local companies were in the running for the expansion ownership.

In the KBO, all eight clubs are owned and operated by private companies, some of them major conglomerates such as Samsung, SK and LG.

The NCsoft team could join the KBO as early as 2013. The KBO wants to add a 10th club soon so it could have an option of running a two-division league.

“If the city of Changwon and NCsoft can set an example (of municipality-corporation partnership), then the preparation for a 10th club will be accelerated,” You said.

Kim Taek-jin, the chief executive of NCsoft who will serve as the owner of the ball club, said at a press conference that he wants to build a team that will be focused solely on baseball.

“A team that’s crazy about baseball, about winning and about doing the best it can as a group of professionals is the team we aspire to become,” Kim said. “Whenever our company went through difficult times, we drew inspiration from encouraging stories of baseball. We have to become a ball club that can give hope to the people.” (Yonhap News)