[ The Korea Herald – Send E-mail ]
South Korea willing to hold military talks with North: minister
By 김경호
Published : Mar 31, 2011 - 19:21
Updated : Mar 31, 2011 - 19:21
South Korea’s defense minister said Thursday his military was willing to hold low-level military talks with North Korea if the North suggests such a meeting again, but insisted that no progress would be possible unless Pyongyang apologizes for last year’s deadly attacks.

“However, there is no change in our prerequisite. North Korea should first apologize for the torpedo attack on the Cheonan warship and the artillery strike against Yeonpyeong Island,” Kim said.

Tensions between the two Koreas remain high following the North’s two attacks that killed a total of 50 South Koreans, including two civilians.

The North denies it was responsible for the March 26 sinking of the Cheonan warship and claims the Nov. 23 bombardment against Yeonpyeong was provoked by the South. 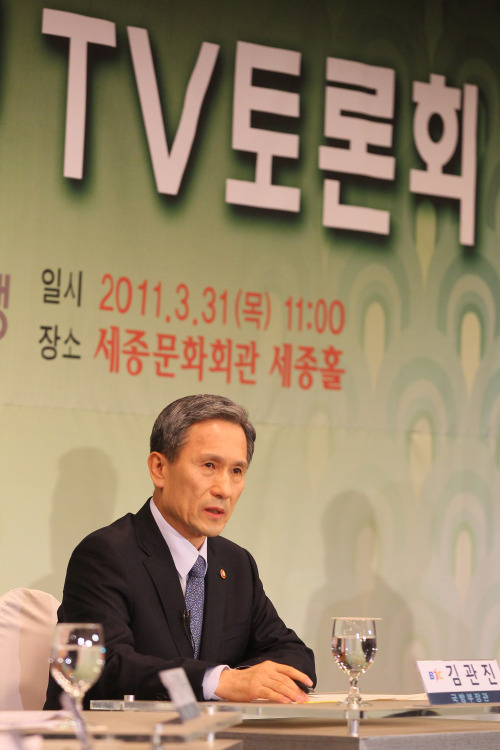 Defense Minister Kim Kwan-jin at a debate in Seoul on Thursday. (Yonhap News)
Preliminary military discussions in February, the first meeting since the artillery attack of Yeonpyeong, broke down after the North’s representatives refused to apologize for the attacks.

At the debate, Kim reiterated that South Korea will swiftly and strongly respond with force if the communist state launches another attack, accusing the North of plotting a new provocation.

“If North Korea launches another military attack, our military will swiftly and strongly punish the enemy’s forces until they surrender,” Kim said.

In response to the North’s attacks last year, Kim said, the South’s military has changed its rules of engagement and bolstered its defense capabilities near the inter-Korean borders to immediately strike “the sources of attack as well as its supporting forces” in the event of another attack.

Early this month, the defense minister unveiled a package of military reform measures to better prepare for the North’s possible aggression.

The measures included streamlining the command structure and a 15 percent cut in the number of general-grade officers over the next decade to make the military slimmer but more efficient.

The military reforms, however, have drawn a backlash. Retired generals have voiced opposition to the reduction of general-grade officers, and active-duty senior officers, mainly from the Navy and Air Force, claimed that the measures would deepen the Army’s dominance in the military.

Despite some resistance, Kim said he sees the reform measures as essential to building a stronger military.

“Military reforms are not a matter of choice, but an inevitable task of our time,” Kim said. “The military should change to adapt itself to the fast-changing battle environment.”(Yonhap News)