“The threat of a counter-nuclear force may be the only thing that will discourage North Korea from developing its nuclear arsenal,” Rep. Chung Mong-joon, former chairman of the ruling Grand National Party, told a forum at the School of Advanced International Studies, at Johns Hopkins University. “It will force China to make the ultimate choice; to stay as the sole nuclear power in East Asia, or to let the entire region become nuclear.”

The nuclear talks involving the two Koreas, the U.S., China, Japan and Russia have been stalled for more than two years over U.N. sanctions for the North’s nuclear and missile tests and the torpedoeing of a South Korean warship and the shelling of a South Korean border island that killed 50 people last year.

“China seems unwilling to pressure North Korea to give up its nuclear program,” Chung said. “It does not want North Korea to collapse, either. To make things worse, the U.S. seems to be exhausted from the endless and fruitless negotiations with North Korea. It is now perhaps willing to settle for non-proliferation rather than complete elimination of North Korean nuclear weapons.”

Chung dismissed concerns that the redeployment “will only give North Korea the excuse to develop WMDs,” saying, “North Korea is already a de facto nuclear power.” 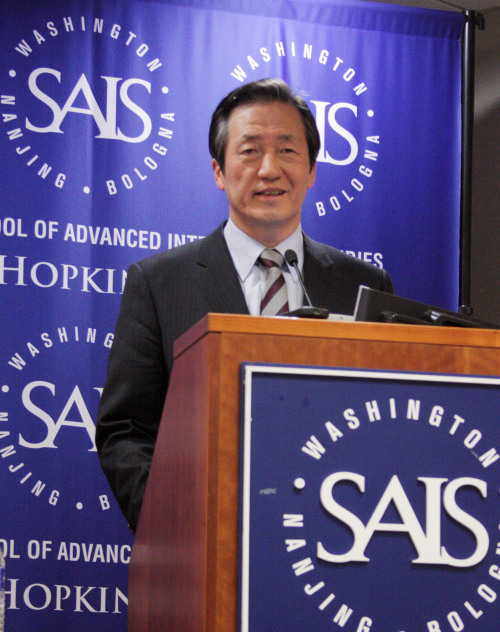 In November, the North Korean regime also disclosed a uranium enrichment plant that could be used to make nuclear weapons apart from its plutonium program. The North claims its intention is to generate electricity.

“Others argue that this will start an arms race in Northeast Asia,” Chung said. “We have tried every mean at our disposal to denuclearize North Korea for the past 30 years. They have all failed. Maintaining the status quo is not an option. Now is the time to act.”

The U.S. fears any redeployment of tactical nuclear warheads in South Korea or the South’s nuclear armament will trigger a nuclear arms race in Northeast Asia and undermine international efforts to denuclearize the North through the six-party talks.

The U.S. also maintains an agreement with South Korea that bans Seoul from enriching uranium or reprocessing spent nuclear fuel.

Some South Korean conservatives have called for the redeployment of U.S. battlefield nuclear weapons or a nuclear-armed South Korea since North Korea conducted nuclear tests in 2006 and 2009 and test-fired ballistic missiles.

U.S. officials have said they are not considering redeploying tactical nuclear weapons to South Korea.

“Our policy remains to support a non-nuclear Korean peninsula,” James Miller, principal deputy undersecretary of defense for policy, said earlier this month. “The U.S. nuclear umbrella remains firmly over South Korea, and neither side believes that on peninsula, deployments are necessary to sustain that deterrent.”

The U.S. pulled all of its tactical nuclear weapons out of South Korea in 1991 as the two Koreas signed an agreement calling for denuclearization of the Korean Peninsula and inter-Korean rapprochement.

Washington since then has committed to providing so-called “extended deterrence,” using all of the U.S. military might, including the nuclear umbrella and ballistic missiles, in defense of South Korea.

Rep. Chung Mong-joon, former chairman of the ruling Grand National Party, speaks to a forum at the Center for Strategic and International Studies in Washington D.C. on March 28. (Yonhap News)