Toyota Motor Corp. on Tuesday said it wants its U.S. car dealers to stop ordering more than 200 replacement parts made in Japan because it’s worried about running out of them. And Honda Motor Co. said it will temporarily cut production at its North American auto factories starting Wednesday due to shortages.

It’s all because of the March 11 earthquake and tsunami that devastated Japan and its huge auto industry. The quake damaged many parts supply companies that make key components for cars and trucks in the U.S. and other countries. Industry analysts expect many automakers to run into shortages until production returns to normal. No one’s certain when that will be.

Already several automakers have been forced to cut production. Chrysler Group LLC, Ford Motor Co. and others have stopped taking orders for certain paint colors because a specialized pigment factory hasn’t been able to come back on line.

Toyota has restricted orders for some Japanese components made at more severely damaged plants to make sure they remain available.

It has told U.S. dealers they can’t order 233 parts for Lexus, Scion and Toyota models unless they have a customer who needs one for a repair.

Dealers said the parts include brake rotors, body panels, shock absorbers and other components. They mainly are for the Prius gas-electric hybrid and hybrid versions of the Highlander SUV, and the Camry midsize sedan.

Toyota spokesman Steve Curtis said he did not know specifically which models were affected.

“We are asking the dealers to refrain from ordering parts in excess of what they need,” he said.

Parts managers at some dealerships may have ordered additional parts made in Japan in anticipation of shortages, and those orders could cause Toyota to run short, said Earl Stewart, who owns a Toyota dealership in North Palm Beach, Florida. 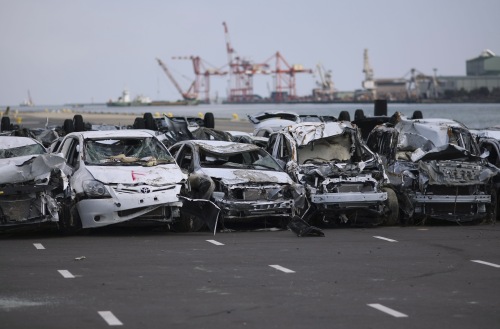 New vehicles damaged by the tsunami in a Toyota parking lot at Sendai port, Miyagi Prefecture, Japan, Monday. (AP-Yonhap News)
“It’s not necessarily being a bad guy. It’s just doing your job,” Stewart said. “If everybody decides to stock up in advance, it’s kind of like hoarding and suddenly there’s a shortage.”

About 70 percent of Toyota cars and trucks sold in the U.S. are built in North America, but roughly one in four parts in those vehicles still come from factories in Japan.

Production of most replacement parts resumed in Japan on March 17, and Toyota began shipping them to the U.S. soon after.

Meanwhile, Honda has run short of some engine, transmission and electrical parts that come from Japan. As a result, it will cut the number of hours that some North American assembly lines operate each day. Cuts will vary by plant and model, but Honda would not say how many hours it would cut from production schedules, or what models would be affected the most.

Honda has factories in Ohio, Indiana, Alabama, Georgia and Canada.

Like Toyota, most of Honda’s parts for cars build in North America come from suppliers in the region. But some are still imported.

“Our North American suppliers can pretty much supply virtually the whole car, but you’ve got to have every part,” said Honda spokesman Ed Miller.

Employees have the option of staying at the plant and being paid during the shutdown hours, taking vacation time, or taking time off without pay.

Much of Japan’s auto industry ― the second largest supplier of cars in the world ― remains idle weeks after the earthquake. Few plants were seriously damaged by the quake, but with supplies of water and electricity fleeting, no one can say when factories will crank up. Some analysts say it could be as late as this summer.

The uncertainly has suppliers, automakers and dealers scrambling. And it exposes the vulnerability of the world’s most complex supply chain, where 3,000 parts go into single car or truck. Each one of those parts is made up of hundreds of other pieces supplied by multiple companies. All it takes is one part to go missing or arrive late, and a vehicle can’t be built.

Goldman Sachs estimates the shutdowns are costing the Japan automakers $200 million a day, which adds up to $2.8 billion for just the past two weeks. Each week of continued shutdowns costs $1.4 billion. By comparison, Toyota made $2.3 billion in all of 2010, and its sudden acceleration recalls cost $2 billion.