The government has recently set out long-term research and development plans with an aim to join the league of top five international technology powerhouses by 2020.

Convergence-based technologies are expected to generate sales of 380 trillion won ($330 billion) by 2025, according to the R&D Strategic Planning Team under Ministry of Knowledge Economy.

The investment fund will be jointly organized by the government and the private sector, ministry officials said.

“Should we succeed in the development of the six technologies, they would create 380 trillion won in sales, $240 billion in exports, 400,000 jobs and initiate 125 trillion won of investments,” Hwang told reporters.

The team has come up with the plan after eight months of preliminary feasibility review, which was carried out by discussing it with academics and industry experts, ministry officials said.

The country’s chief technology officer particularly stressed that small- and medium-sized reactors are projected to be highly promising as they are safer and their energy produce can be used for diverse purposes.

“The facilities are safe due to their use of natural wind (instead of water) to cool them down and their outcome is multi-purpose, not just being limited to generating electricity, Hwang said.

The country is hoping that this type of reactor will be able to drive the country’s nuclear facility exports which hit a snag since the 2009 United Arab Emirates deal, ministry officials said. 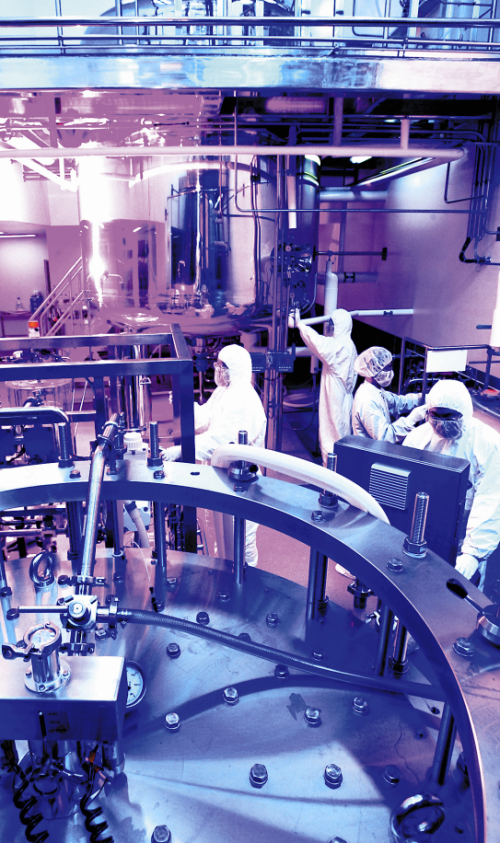 Researchers work at a local bio-technology venture company. (The Korea Herald)
Though Germany and China have halted their plans to construct nuclear power plants after the recent disaster in Japan, the global nuclear energy market still has a great potential to grow for many developed countries rely on emission-free nuclear power for their energy supply, Hwang said.

The government said it will soon begin approving and encouraging the establishment of compact nuclear facilities ― with capacity of less than 300 megawatts ― within the country by 2019.

Hwang also addressed the significance of researches on graphene, which is a highly functional material that can be used for production of a variety of goods, including transparent flexible displays.

Graphene, an allotrope of carbon, is a suitable material for chips and displays for it can deliver current 100 times faster than silicon and is 200 times stronger than steel, but is also very flexible, the team said.

In order for Korea to continue leading the global display market despite its competitors such as China and Taiwan, Hwang said further improving their and definition, convenience and reducing weight are imperative.

Choi, meanwhile, emphasized the importance of job creation and shared growth between large and smaller firms in the execution of upcoming state-led researches.

“We will pursue researches which are focused on job generation, quality of life improvement, and making continuous progress and (tangible) outcomes,” Choi said.

The minister said the country will boost its investments on human resources from 25 percent of the total R&D budget to 40 percent over the next five years.

He added that the ministry will require each consortium involved in the projects to comprise at least 50 percent of it with smaller firms, and provide those which include more them with incentives.

The state-led R&D venture was launched last June aiming to bolster efficiency in the execution of the country’s research budget.

The amount, which stood at around 4.4 trillion won as of last year, has often been criticized for being spent ineffectively as it takes considerable time for research outcomes to become commercialized.

To such an end, the government took the unprecedented step of employing noted experts from the private sector, plus academics including Hwang and five permanent managing directors, as well as advisors from in and outside the country.

Hwang has played a pivotal role in helping Korea become a leading DRAM chip producer. He is widely acknowledged for his theory that semi-conductors storage capacity doubles each year, often referred to as “Hwang’s Law.”