The sides did not agree on a date for the next round of talks, though the North suggested early April and the South said it would review the proposal, according to Yoo In-chang, the chief South Korean delegate.

During the meeting of geologists from the Koreas at the western South Korean border town of Munsan, the North emphasized possible radioactive damage from Japan’s nuclear crisis as well as unusual weather phenomena it has faced recently, apparently calling for joint meteorological measures.

Pyongyang, suffering from deepening food shortages after South Korea suspended dialogue and aid, was expected to attempt to ease tensions by highlighting potential natural disasters the two Koreas must cooperate on in the face of the recent earthquake in Japan.

“We had underground water fluctuating by 60 centimeters and muddy spring water after the Japanese quake,” Yun Yong-geun, head of the North Korean delegation, told his South Korean counterparts during the first few minutes of the meeting, open to media. “We no longer can be fully sure about anything when it comes to meteorological occurrences.”

The North is “diligently monitoring whether radioactive contamination could reach” it, the expert from Pyongyang added, referring to the nuclear crisis in Japan where radioactive leaks have taken place from a northeastern nuclear plant.

Seoul says it has found traces of radioactive material believed to be from the leaking Fukushima nuclear plant.

Tuesday’s meeting came amid heightened concerns over natural disasters as Tokyo is struggling to deal with the aftermath of a powerful earthquake and tsunami that have taken the lives of tens of thousands of people so far.

Pyongyang was first to propose holding talks to discuss cooperative measures over the volcanic Mount Baekdu, to which Seoul responded by temporarily laying aside long-running grievances for fear of another regional disaster.

Relations between the Koreas, who are technically still at war, remain at the worst point in decades after North Korea conducted two deadly attacks last year, killing as many as 50 South Koreans including two civilians.

Located on the border between North Korea and China, Mount Baekdu is the highest on the Korean Peninsula and Manchuria standing at 2,744 meters. Its Korean name meaning “white-headed mountain,” Baekdu is also considered a sacred symbol of ancestry by both Koreas. 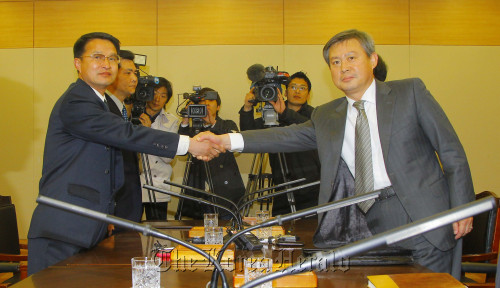 Chief South Korean delegate Yoo In-chang (right) shakes hands with his North Korean counterpart Yun Yong-geun as they start a meeting in Munsan, south of the inter-Korean border, Tuesday, on a North Korean volcano’s possible eruption. (Park Hae-mook/The Korea Herald)
The North, in particular, claims its leader Kim Jong-il was born there, although outsiders believe it is merely fiction conjured up to glorify the dictator.

Having last erupted in 1903, local experts have long said the mountain may have an active core threatening the entire peninsula and far beyond.

As experts were discussing the volcanic potential, Seoul’s pointman on North Korean affairs called the meeting “critical under all circumstances.”

“The two Koreas are under sensitive circumstances, but discussions among experts must proceed (over Mount Baekdu),” Unification Minister Hyun In-taek told a policy meeting.

The minister also hinted at resuming government-level talks with North Korea, urging the communist state to “show an earnest attitude for an earnest dialogue.”

The two Koreas failed to narrow differences during defense talks last month as the North Korean delegation refused to take the country’s attacks against South Korea to higher-level military talks, turning Seoul reluctant about doing the North any favors.

The impoverished North, which suffered among its worst recorded flooding last summer, is in need of outside assistance for food and fuel it will only secure through better relations with Seoul.

Partners of the multinational talks on Pyongyang’s denuclearization agreed not to reopen negotiations with the communist state until it first solves issues with its rival South.

Apparently cautious about expanding the meaning of Tuesday talks, Seoul downgraded the meeting to a civilian level of academic nature instead of holding a government-level meeting as the North initially proposed.

“Scholars, not officials, attended the meeting today as the issue is in need of expert analysis,” an official at the Unification Ministry here said.

Some geologists cautiously speculate that an eruption could take place as early as 2014 at Mount Baekdu, citing signs that the mountain has actually remained an active volcano for centuries.

Evaluations do show some “unusual symptoms” including a 2002 7.3-magnitude earthquake which rattled areas in the vicinity of the mountain. The frequency of quakes has notably increased since then.

Should the volcano erupt, it could affect as far as northern America and Greenland, also causing the temperature to drop by at least two degrees Celsius for months in nearby regions, Seoul’s state-run environment institute said in a recent report.