In a press conference held in downtown Seoul, it unveiled its lineup of four applications in three different genres ― story of mankind, inspiring toy and study 101.

“The role of podotree is meaningful in that it is not fighting against others in and out of Korea to spread local contents, but it is a company that is establishing a business model which has the best fit to the ‘smart’ revolution with globally-common content,” said the company’s chief executive Lee Jin-soo.

As an initial step, the company released two mobile apps ― Super 0.99 and who? ― for the first time in the Korean market on Monday, with plans to launch Super 0.99 in Japan and Super 0.99, who? And Cube Dog in the global stage in May, according to Lee.

Its fourth 3-D classic app called “Wizard of OZ” will roll out in the market later in June, he added. 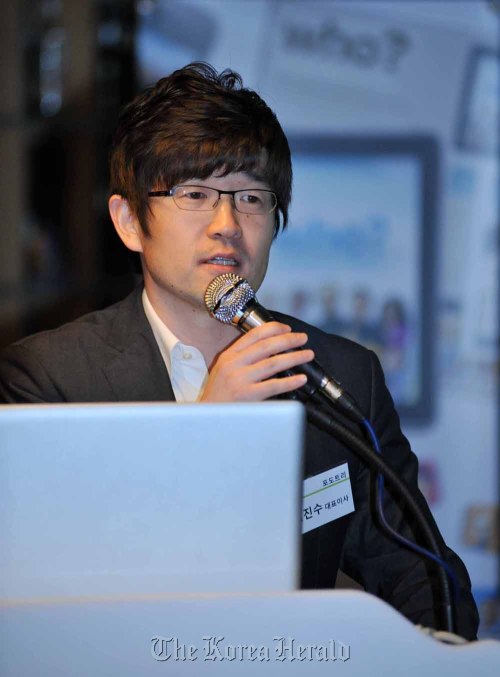 Lee Jin-soo
“Our most important marketing strategy is that all apps are a priceless $0.99,” he said, claiming that the competitiveness of the app and the affordable price makes it priceless.

With a goal of wowing smartphone and tablet PC owners with universal contents, the Super 0.99 English vocabulary app, for example, is equipped with 25,000 words and 5,000 idioms from many English tests like TOEIC, TOEFL and SAT, and two versions are available for the two different markets ― native English market and non-native English market.

It is also supported in eight different languages which include Korean, Japanese, Chinese, Italian and Spanish.

The story-telling Wizard of OZ app is dubbed as an e-adventure, not an interactive e-book, and it has combined many factors like 3-D interface, animation and touch interaction with sound, according to its officials.

Aside from the differentiated mobile apps, what is most eye-catching about the new venture firm is that it is chaired by Kim Beom-soo, the founder of NHN which runs the nation’s top search engine Naver, and headed by Lee Jin-soo, who served as the vice president of marketing at Kakao. Kakao is the firm that developed the popular mobile app Kakao Talk.

Kim, also known as Brian in his company, decided to work together with 100 CEOs, acting as their mentor when he left NHN, which led him to build the two venture companies. The second venture firm podotree, established in last July, was capable of securing 3 billion won ($2.69 million) in investments earlier this month.

“Today is the day which we were able to make establishment after an eight-month long journey,” said Kim. “There are three major success factors that need to be in place, which are human resources, item and funding, for an ultimate synergy and I believe (podotree) has it.”