Throughout the years, the dichotomy of peace in the Holy Land has been close enough to touch, smell and feel but also, far enough to believe.

Yet hope still stands as an underlining principle that drives conflicting sides to see an end to the conflict.

The new paradigm shaping the Middle East is creating another dichotomy. On the one side there is democracy and freedom for a country’s citizens who wish to express their own destiny; on the other, uncertainty and a possible political vacuum which could destroy all prospects of peace and prosperity.

“I have to be hopeful. It is very frustrating. It’s a history of missed opportunities for more than 100 years,” said Israel Ambassador Tuvia Israeli to The Korea Herald.

“It is regrettable the casualties on both sides. This is a region with a rich culture and history. There is scarcity of resources like water, but if we join forces we can overcome everything and that will improve the lives of everyone living there,” he added.

Israel and the world breathed a sign of relief when Egypt declared that it would honor its international commitments after the fall of Egyptian President Hosni Mubarak.

Now, all eyes are on the developments in other parts of the Arab world such as the Palestinian territories, Bahrain, Jordan, Yemen and Libya and on Iran’s presence in the unrest. 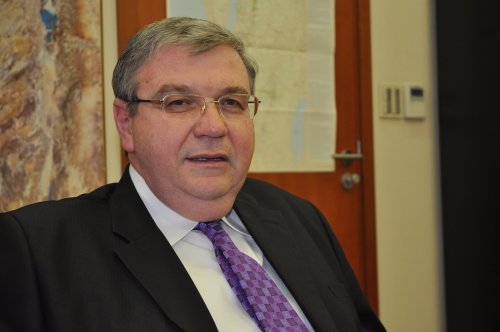 Israel Ambassador Tuvia Israeli (Yoav Cerralbo/The Korea Herald)
A movement for change that started with young educated citizens of those countries has either bloomed in countries such as Egypt or reverted to political and social unrest as in Libya.

The move to demand change has taken shape in the Palestinian territories also.

In Gaza, thousands of people took to the streets protesting against the Palestinian political division between Hamas-controlled Gaza and the Palestinian Authority, which is led by the rival Fatah movement.

Gaza Prime Minister Ismail Haniya’s office stated on March 14 that it “supports the efforts by the young people and the factions that aim to end the division.”

But, a day after that statement, Hamas police violently dispersed several peaceful demonstrations in Gaza.

“The reason for this prolonged peace process is because of the split between Gaza and the West Bank,” said Israeli.

“There is a clear understanding that there is no possibility of starting negotiations with Israel because you would have three entities,” he added.

Another big setback for the prospect of peace came earlier this month when an alleged Palestinian man, or men, broke into an Israeli settlement in the West Bank and stabbed to death a family comprising of a mother, father and three children, including a three-month-old baby.

“It’s a heavy toll and damaging towards the peace process,” he said.

For Israel, there is the hope of the end to the maximalist view of a destruction of Israel in order to regain Palestinian lands.

“Our concern is that even if we can get along to formulate something and move forward, (Palestinian Authority President Mahmoud) Abbas will not have the political power to carry it out or to see that the Palestinians will comply,” he said.

Yet many things are happening behind the scenes with a diplomatic initiative likely to be unveiled either before or during Israeli Prime Minister Benjamin Netanyahu’s trip to Washington in May.

Looking ahead, it seems that Netanyahu is going to propose a less ambitious new initiative that will try to identify areas where both sides can agree.

While Netanyahu is keeping the details of any new initiative under wraps, the one demand that will probably remain is that Israel retain a security presence along the Jordan River especially in light of the changes in the Arab world.

Insiders believe that this initiative will have a new direction that involves widespread understanding of the need to move in a phased and gradual manner toward an agreed-upon objective.

“The setting is there to move in a positive direction. There is the issue of Hamas in Gaza, which does not answer to the central government in Ramallah. Apart from that, once that is settled, we will see positive improvements,” he said.

In the 1970s, the Israeli-Egypt peace deal emerged after the geopolitical status quo was violently shaken. Today, the status quo in the Middle East is again being shaken, opening Israel’s eyes to a new reality in which its traditional partners are either missing, as in the case of Mubarak, or strongly pushing for a solution to the crisis as with the United States.

Yet the naysayers to any peace deal are present on both sides and are happy either with the status quo or the maximum view of the other’s destruction.