“Most people here do not know how to cook pasta,” the Italian chef observes. “They think it’s ok to leave it in the pan for 12 or even 14 minutes. If you are thinking of that length of time, try taking it out some minutes before that ― that way it won’t overcook. Al dente is better!”

Sebastiano should know. He grew up in a family of chefs in the small Italian city of Modena, in an area home to gastronomic glories including balsamic vinegar, Parmesan cheese, Parma ham and lasagna.

For Sebastiano, a career outside of cookery was out of the question.

The 41-year-old is now serving up authentic Italian meals for Korean businesspeople and CEOs at a restaurant in Seoul’s affluent Cheongdam-dong, after moving to the country with his Korean wife and their son in 2004. The pair first met when his wife, also a chef, was training in Italy.

He is now executive chef for Antonio’s restaurant, serving regulars who visit up to four times a week for their Italian fix. But Sebastiano thinks Korea still has a lot to learn about authentic Italian cuisine.

“There are many Italian restaurants in Korea, but often it is just a name, there are Korean chefs working in the kitchen who have never been to Italy ― they do not know the true Italian flavors,” Sebastiano says. “The Korean idea of Italian food is very different.”

Now, for those questioning the authenticity of Korean trattorias’ fare after being served pizza with kimchi on the side, Sebastiano aims to teach students how to recreate authentic Italian cuisine in their own homes.

His new classes to start at Seoul’s O’ngo Cookery School have been designed for absolute beginners as Sebastiano plans to teach from the bottom up.

“I want to teach really basic Italian food. If you want to make Italian cuisine well, you have to start with the basic recipes ―- such as a simple arrabbiata sauce. After that you can upgrade and learn to make many different dishes.”

The first class will see Sebastiano demonstrate how to make “fritto misto” ― a seafood dish ― and pasta dish “penne putenesca” as well as a chicken entree that uses balsamic vinegar and shallots.

He is a teacher with experience, having worked for many Italian eateries in the U.K., Tunisia, Hungary and Spain, as well as five-star hotels in Italy and the three-Michelin star Ristorante La Pergola in Rome. 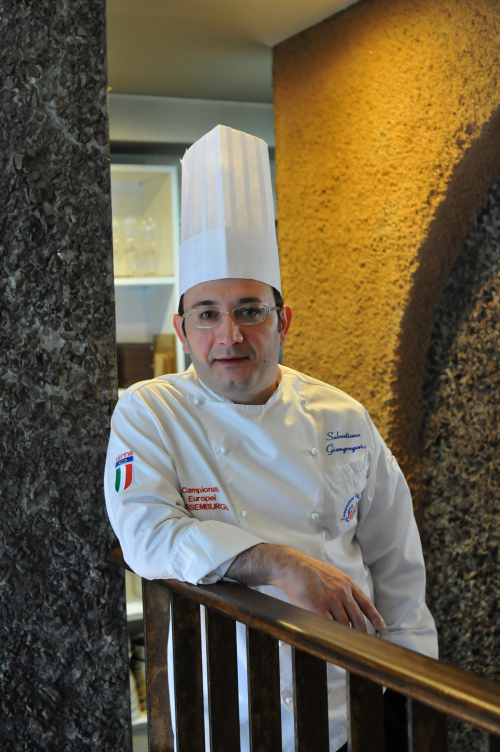 And the chef stepped up to the challenge of introducing real Italian flavors to the Asian palette.

“When I first came to Korea, my employer asked me to show them traditional Italian food. I made 300 different test dishes in that first time. I was making 30 different kinds of dish a day,” Sebastiano recalls.

“They were familiar with the concept of Italian food, but they had only tried some recipes made from books by people who had never been to Italy.

“(Trying the real thing) was magical for them. In Korea they love Italian food ― and I want to make sure they taste the true flavors.”

In order to stay true to his culinary roots, Sebastiano imports 70 percent of his ingredients, including meats and cheeses, from Italy.

“I can get very good fresh ingredients here such as eggs and peppers here, but for making fresh pasta, I use imported Italian flour. Fresh pasta is very important. Tagliatelli, tortellini, cannelloni ― we make it all fresh here.”

Sebastiano has also dabbled in fusion cookery ― by making cannelloni a la Korea.

The dish included fresh pasta shells stuffed with tofu instead of cheese, spinach replaced with sesame seed leaves, a sauce using soy milk and kimchi rather than milk and tomatoes.

But Sebastiano still thinks original is best when it comes to daily fare.

The first of his new Italian cookery classes at O’ngo Culinary School, Seoul, is will be held on Thursday. The classes will be taught in English and translated into Korean and cost 60,000 won per person. The class will run from 10 a.m. to 12:30 p.m. with authentic Italian ingredients on sale after the class. Go to www.ongofood.com or call 02-3446-1607 for booking or more details.