PHOENIX (AP) ― The LPGA Founders Cup came down to a chipping contest.

Karrie Webb saved par on the par-4 18th with a chip from the front fringe and a 3-foot putt. About 20 minutes later, Brittany Lincicome also ended up in the fringe short of the green. Her chip ran 10 feet past the hole and she missed the par putt.

That gave Webb her second straight victory and 38th on the LPGA Tour.

“I didn’t think I’d be sitting here today talking about winning,” said Webb, six strokes behind leader Angela Stanford entering play Sunday. “But now that I am, It’s such a great honor to win this tournament.”

Webb, also a comeback winner late last month in Singapore, closed with a 6-under 66 to beat Lincicome and Paula Creamer by a stroke.

The 36-year-old Hall of Famer earned $200,000 for the Christopher & Dana Reeve Foundation and Japan relief efforts in the charity event at Wildfire Golf Club.

The Reeve Foundation supports spinal cord research, treatment and rehabilitation for those living with paralysis. Kelvin Haller, Webb’s longtime coach back in Ayr, Australia, is a quadriplegic. He was paralyzed in an accident 20 years ago.

“That’s why I’ve been associated with them. It’s near and dear to my heart,” Webb said. “I think they’ll understand that I’m splitting the $200,000 between them and the relief efforts in Japan. ... Japan, the fans, the people and many businesses over there have supported me throughout my entire career. It’s just the least that I could do.” 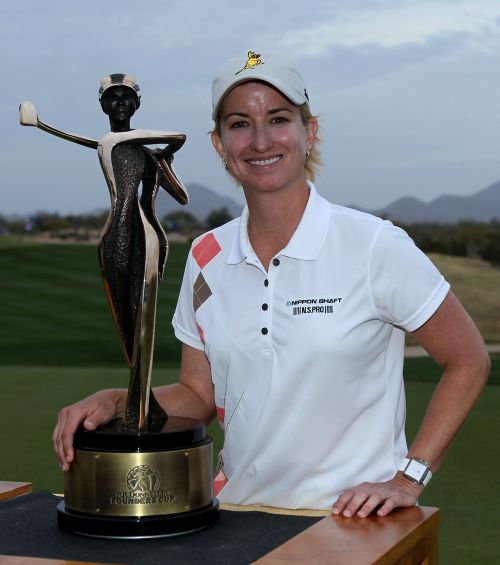 Karrie Webb of Australia poses with the championship trophy. (AFP-Yonhap News)
Instead of paying the players, the tournament honoring the 13 tour founders donated $1 million to charity ― half to The LPGA Foundation and its LPGA-USGA Girls Golf program and half to the top-10 finishers’ designated charities.

“I think we need to celebrate these ladies more than we do,” Webb said. “I wouldn’t have had the career that I’ve had and the life that I’ve had if it weren’t for those 13 women. I think they did a fantastic job to get this tournament run as well as it was. You wouldn’t know that they had only a few months to put it together.”

Webb finished at 12-under 204 for her third Phoenix victory. She won the previous Phoenix event in 2009 at Papago and in 1999 at Moon Valley.

“I love coming out to the desert,” Webb said.

Cristie Kerr was fourth at 10 under after a 69.

After opening with a 71, Webb shot a 67 on Saturday, to reach 6 under and give herself a chance Sunday, especially if Stanford faltered.

And did she ever. The Texan, 12 under after opening 66s, had three three-putt bogeys in a 75 that left her fifth at 9 under.

Lincicome matched Webb at 12 under with a short birdie putt of her own on 15.

Webb finished with the critical 3-footer for par on 18.

It was then up to the long-hitting Lincicome.

But she couldn’t match Webb on the final hole.

“Chipping is something that I’ve struggled with my whole entire life,” Lincicome said. “I wouldn’t say awful, but it’s definitely not good. So it doesn’t surprise me that chip didn’t work out too well. But I hit a great putt. I thought that putt was going to go in. Just a little bit more speed and it would have held its line.”