POSCO, the world’s fourth-largest steelmaker, said it begun work Monday on a new plant in China to produce galvanized steel sheets for cars.

The plant will be built on a 270,000 square-meter area in Guangdong, southern China in a joint project with the firm’s subsidiary Guangdong Shunde Steel Co. and the Guangdong Province government, the company said in a statement.

The steel giant aims to supply China’s growing demand by securing a solid foothold in the world’s largest auto market.

When completed in 2012, the facility will have an annual production capacity of 450,000 metric tons of zinc-coated steel sheets, a key material for cars.

“The steel plate factory will help Guangdong take a leap forward as a core base for the automotive and components industries, just like the one we set up in 1997 has contributed to the development of the region as a global mecca for home appliances,” Chung Joon-yang, POSCO chief executive, said at the ground-breaking ceremony. 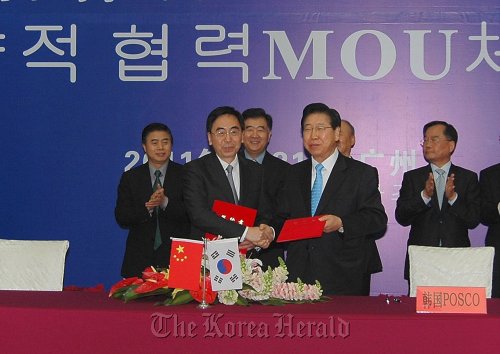 The firm said it expects to take part in such projects along with its affiliates such as POSCO Engineering & Construction, POSCO ICT and POSCO Power.

In addition to the latest production line, POSCO plans to expand its stainless steel output in China to 1 million tons by 2013.

It is currently working to establish an additional stainless steel cold rolling mill in eastern Jiangsu Province with an annual production capacity of 230,000 metric tons.

In March, it started construction for a factory in India to produce 450,000 metric tons of the material a year.