Each team had a chance to win it from the foul line in the last 2 seconds. After Butler’s Shelvin Mack inexplicably fouled Gilbert Brown near midcourt with 1.4 seconds left, Brown made the first try to tie it.

He missed the second, and Howard was fouled by Nasir Robinson while grabbing the rebound. Howard made the first shot, then intentionally banged the second attempt off the rim.

Brown finished with 24 points, but he will forever remember the missed free throw.

Mack scored 30 for the eighth-seeded Bulldogs (25-9), who used a string of upsets to reach the championship game last year. Butler has won 11 straight overall and is 7-1 in its last eight NCAA tournament games.

Pittsburgh (28-6), the Big East regular-season champion, trailed by 12 in the first half and blew a five-point lead in the second. 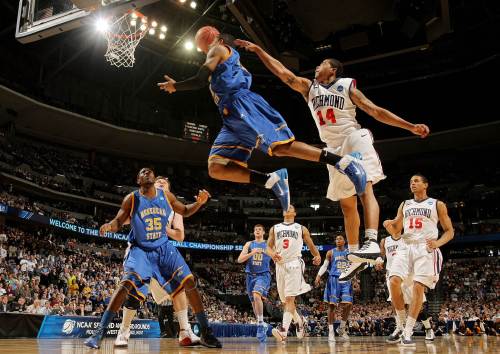 Morehead State’s Terrance Hill drives to the basket against the Richmond Spiders. (AFP-Yonhap News)
Taylor shot just 2 of 16 but came up with the biggest play of the game, swatting Pullen’s tying attempt with Wisconsin (25-8) up three. Josh Gasser then hit two free throws to seal it, sending the Badgers into the round of 16 for the fourth time since 2000.

Billy White had 16 points and 13 rebounds and Kawhi Leonard sealed San Diego State’s exhausting victory with a steal and a slam dunk.

White sank the go-ahead jumper and Leonard made two free throws as the second-seeded Aztecs (34-2) used one last burst of their magnificent athleticism to finally put away the pesky seed Owls (26-7).

Justin Harper scored 19 points and Kevin Anderson added 14, helping 12th-seeded Richmond advance to the round of 16 for the first time since 1988.

Richmond (29-7) shut down 13th-seeded Morehead State big man and NBA prospect Kenneth Faried ― at least as much as anyone can these days.

Jimmer Fredette made seven 3-pointers and scored 34 points to help No. 3 seed Brigham Young defeat No. 11 Gonzaga and move to the second weekend of the NCAA tournament for the first time in 30 years.

The nation’s leading scorer had trouble getting his shots in the first half. But he opened the second by hitting a 3 from five feet beyond the arc as part of an 11-2 run that broke the game open.

The Cougars (32-4) will head to New Orleans to play Florida in the Southeast regional semifinals Thursday. This is BYU’s deepest run into the tournament since 1981, the year Danny Ainge went coast to coast for a last-second layup to beat Notre Dame in the round of 16.

Walker scored 10 of his team’s final 12 points, including four free throws in the final 33 seconds. His most significant basket was a 3-pointer with about a minute remaining. That shot gave the second-seeded Gators (28-7) a 69-65 lead and forced the No. 7 seed Bruins (23-11) into desperation mode.

Freshman Brandon Knight scored a career-high 30 points and Josh Harrellson delivered eight of his 15 during a pivotal stretch of the second half, helping Kentucky beat West Virginia.

Two days after his only basket helped the fourth-seeded Wildcats survive their tourney opener against Princeton, Knight led an 11-0 run coming out of halftime and made six free throws in the final minute to close out fifth-seeded West Virginia.

Kemba Walker scored 33 points and the supposedly powerful Big East finally advanced a team to the NCAA tournament’s round of 16 on Saturday night when Connecticut beat conference foe Cincinnati 69-58.

Walker scored 16 points over the final 10 minutes as UConn ended the game with a 24-13 run.