KYOTO, Japan (Yonhap News) ― South Korea, Japan and China agreed Saturday to work closely together in disaster management and nuclear safety as their foreign ministers met for annual talks that were heavily overshadowed by a devastating earthquake and nuclear crisis.

“I express sincere gratitude that the Chinese and South Korean foreign ministers offered to provide assistance,” Matsumoto told a joint news conference after the talks. “Under this situation, the three ministers intensively discussed strengthening cooperation in disaster management and nuclear safety.” 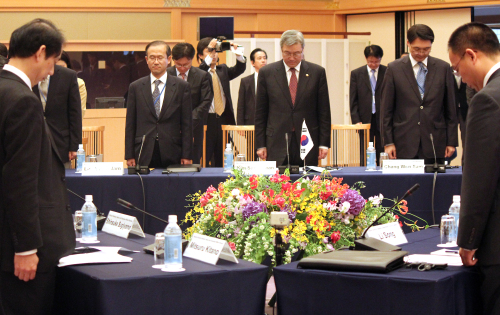 Foreign Minister Kim Sung-hwan (center) and other officials pay silent tribute to Japan’s quake victims at the start of a meeting between top diplomats from South Korea, China and Japan in Kyoto on Saturday. (Yonhap News)
Kim said that the three ministers agreed to produce “visible results” in the two areas ― disaster management and nuclear safety ― at a summit of top leaders set for later this year.

The one-day meeting in the ancient city of Kyoto was meant to lay the groundwork for this year’s summit of the three countries and discuss North Korea, regional issues and other matters of cooperation.

But the gathering, the fifth since 2007, was overshadowed by last week’s massive quake and tsunami.

Japan has also been struggling to bring a damaged nuclear power plant under control as radiation levels from the facility in Fukushima, some 250 kilometers northeast of Tokyo, rose following a series of explosions, fueling fears of a nuclear disaster.

Other topics up for discussion included North Korea and its nuclear programs.

Matsumoto said that the three countries expressed “concern” about Pyongyang’s newly divulged uranium enrichment program, in addition to its known plutonium-based one.

Kim also called for a “stern” response from the international community to the uranium program, saying it constitutes a violation of U.N. Security Council resolutions and Pyongyang’s own 2005 commitment to give up its nuclear programs.

Kim also said that the North should first demonstrate its denuclearization commitment through concrete action before restarting the stalled six-party talks with Pyongyang. He also said that the South is willing to talk with the North about the nuclear and other matters.

But China’s Yang made no mention of the uranium enrichment issue and only called for resuming the six-party talks. That illustrates the wide gap between Seoul and Beijing over how to deal with the issue.

South Korea is seeking to get the U.N. Security Council to adopt a presidential statement condemning the uranium program, but China opposes the move over concerns that it could aggravate tensions.

Beijing claims the matter should be discussed after restarting the six-party talks.

This week’s talks had originally been scheduled for two days, including some friendship events on Sunday. But the additional events have been called off because of the disaster.

The three countries have held a foreign ministers’ meeting every year since 2007.