There is a famous Bible verse on doing good deeds. It states: “When you give to someone in need, don’t let your left hand know what your right hand is doing.”

Kim Jang-hoon, the pop singer dubbed the “angel of donation” for his generous giving to society, agrees partially with the statement. “There are two genres in donations. One is letting the left hand know and the other is not doing so,” Kim told The Korea Herald.

In other words, one is a hidden donation and the other is a “campaign” donation for a particular cause.

In the latter, he tries to lure in media attention. “It’s like a promotion of things that should be brought out in the public arena.” Kim said he is particularly interested in research institutes and organizations whose main purpose is to promote Korea.

Early this year, he donated 1 billion won ($880,000) to firms such as the Voluntary Agency Network of Korea and the same amount to the Korea Advanced Institute of Science and Technology. The money will be spent on securing ancient maps and historical data, all for Korea promotion by Sejong University’s Dokdo Research Institute, self-styled Korea promoter Prof. Seo Kyoung-duk and an ancient map museum at Kyunghee University.

But not everyone seemed pleased with his giving to promote the country.

For Kim, Korea promotion is just a piece of his donation pool. He agrees that the true meaning of donation lies in leaving the left hand in the dark of what the right hand is doing.

Kim has been secretly helping out children at a convent and runaway teenagers for almost seven years.

“Yes, I’m not going to deny the fact that I’m supporting them, but I don’t want to call this a donation. Think of it as giving some pocket allowance to my many younger siblings. Don’t people do that? You don’t call that ‘donating,’ do you?”

His charity toward poor children began after his mother had taken him to an orphanage when he was going through hardships in his early days as a singer. Then, he was reminded of his younger days when he was sick, impoverished and felt hopeless.

“I immediately recovered my senses, and from that day my help came about,” he said. “But it’s really no big deal, I’m doing it for my own happiness.”

Though Kim has donated a huge sum of money to help the underprivileged for an extended year now, he said he has no intentions of establishing a foundation or any sort.

“There is no way I am establishing a foundation, I am not able to manage even my own money well. How would I be able to manage money for others? I don’t even know how much I have in my bank account; I’m not a meticulous kind of guy.”

“Besides, if I had to, I would be too tied down to work, I would have to give up my singing career.”

Kim said that his singing ability and popularity as a celebrity work positively for his “campaign-oriented” giving. And he will extend his singing career as long as he can, only because he wants to keep helping out the needy in the society.

Does he believe in the term “noblesse oblige?”

Kim said he has no idea about what other “noblesse” do, but he is not doing good deeds out of a sense of “obligation.” 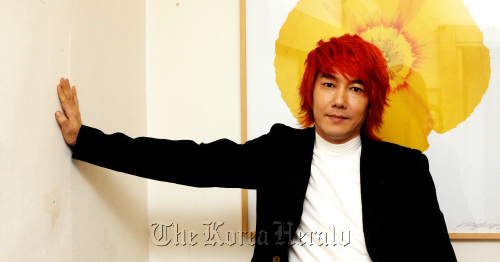 Pop singer Kim Jang-hoon, famous for his generous donations, poses in front of artwork at a restaurant in Chungdam-dong, Seoul, Tuesday. (Park Hyun-koo/The Korea Herald)
“I do what I can do, and I’m not obliged to do it, nor am I a ‘noblesse.’”

Kim also commented on actor Hyun Bin’s recent voluntary enlistment in the Marines for his military service, a sharp contrast to a host of actors who have been charged with draft-dodging. “There are pros and cons to being a celebrity. On the good side, it gets exaggerated attention, but at the same time, on the bad side, we get beat up twice as much by public opinion.

“As for Hyun Bin’s deed, it is admirable, and I hope this has a positive ripple effect for all the young men out there.”

On the renowned red figures in his bank book, probably due to charity donation, Kim said: “To be honest, I don’t even know the pin number for my bank account, and neither do I know how much I have in there, I’m assuming I’d see a lot of minuses there as I made a big chunk of expenses last year.”

“I kind of agree that my financial status may keep women fans away from me, but I don’t care. I’m too busy doing my things. Currently, I’m not interested in dating a woman.”

Even if so, one may wonder if the pop singer donates too much. Unlike many other pop singers, he does not own a house, though he could have easily bought a luxurious home.

“I don’t need a house in my name right now, I don’t have to. The home where I live now, is enough. Just because I have a bank account in the negative does not mean that I’m impoverished. I have just enough for myself, that’s it.”

On the matter of donating to the Japanese quake victims, Kim said that it was a “grey area” for now, not because he does not feel a deep sympathy for them, but because of his image as a “Dokdo island guard.”

“I have thought about it. The disaster concerns the whole world, which should be responsible for today’s climate change and such apocalyptic disasters happening in Japan. I am seriously considering ways to help the victims in Japan, but I am very careful about it at this stage because I have promoted Dokdo as Korean islets.”

Recently, former “comfort women” forced to provide sex to the Japanese army during World War II, prayed briefly for the quake victims in front of the Japanese Embassy in Seoul during their weekly rally to demand apology for Japan’s atrocities upon them.

“That’s just really humanitarian. I respect that. It is good to donate or give the victims financial help, but I do want to give them a word of consolation, but my image and situation related to the Dokdo sovereignty movement makes me a bit careful about what steps I can take.”

Though Kim believes that “donations” are not “give and take,” he said hallyu stars stepping up to help the Japan quake victims deserve praise. “Whatever the reason behind the donation, for anyone, it is better than just sitting back and watching the situation when you are well-off enough to help out.”

In closing, Kim said that he wants to be remembered as a famous pop singer, not as a philanthropist.