The campaign launched in October comes as Beijing faces pressure from the United States and other trading partners to stamp out product copying. China is a leading soure of fake goods despite repeated crackdowns, but Chinese officials have promised the latest enforcement will produce lasting results.

Communist leaders have given the new crackdown special prominence, publicly linking it to efforts to transform China from a low-cost factory to a creator of profitable technology by nurturing companies in software and other fields. China’s fledgling software, music and other creative companies have been devastated by unlicensed copying.

“Intellectual property protection is essential for building an innovation-oriented country and achieving a shift from ‘China manufactured’ to ‘China innovated,’” Li Chenggang, deputy director of the Commerce Ministry’s law department, said at a news conference. He was joined by officials of China’s commerce, intellectual property and other agencies. 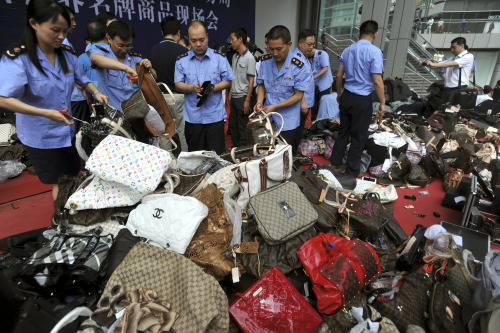 Chinese business administration officers cut fake luxury branded handbags during a mass elimination of counterfeit products in southwest China’s Chongqing city. (AP-Yonhap News)
Businesspeople have expressed optimism about the latest effort because a rising Communist Party star, Vice Premier Wang Qishan, has been put in charge and an enforcement office set up in the Commerce Ministry.

A report distributed at Sunday’s news conference said that goods seized in the latest crackdown include 26,000 mobile phones, some with phony Nokia and Apple labels, copies of Louis Vuitton bags and Rolex watches, automotive components, DVDs and clothing.

Also Sunday, the official Xinhua News Agency said 23 people accused of producing fake medicine were detained in the central city of Jingzhou in Hubei province. It said they made more than 100 million capsules filled with sawdust and wheat flour and sold under the brand names of 201 different types of medication.

Xinhua said the medicines were sold by mail and over the Internet but gave no details of whether anyone was injured or which brand names were counterfeited.

Piracy is especially sensitive at a time when Washington and other Western governments are trying to create jobs by boosting exports. In 2009, the World Trade Organization upheld a U.S. complaint that Beijing was violating trade commitments by failing to root out the problem.

Rampant copying also has hampered Beijing’s efforts to attract technology industries because businesspeople say companies are reluctant to do high-level research in China or bring in advanced designs for fear of theft.