When she arrived, though, the British singer-songwriter’s irresistible smile, conversation with the audience and unbeatably soulful voice instantly killed any complaints.

You could hear grumbles like “why hasn’t the band checked the amps in advance” and “is Corinne at the airport?” among the audience.

However, shouting “I love Seoul,” Bailey Rae started off with “Are You Here” and the audience frantically cheered as if nothing that came before had really mattered.

Sophisticated and sweet vocals filled the mid-sized concert hall where the floor was packed with people standing.

She continued to rule the stage with “Paris Nights / New York Mornings,” “Closer,” “Love’s On It’s Way,” “Till It Happens To You” and “Paper Dolls.” 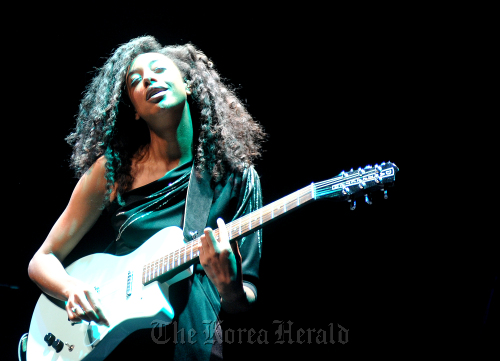 U.K. singer-songwriter Corinne Bailey Rae performs during her solo concert in Seoul on Thursday. (9 Entertainment)
The artist received more enthusiastic hurrahs when she performed Bob Marley’s “Is This Love.”

At each end of the song, Bailey Rae thanked the audience by saying “Gamsahamnida” (Thank You) with perfect Korean pronunciation.

The concert reached its climax when special guest IU made a surprise appearance on stage and joined Bailey Rae to do a duo for the famous song “Put Your Record On.” She immediately moved on to “Like a Star,” her 2005 debut single which brought her international stardom in 2006.

Audience members shouted “You are like a star” and “I love you more.”

She ended the concert with “The Sea,” but performed two encore songs, “Breathless” and Doris Day’s “Que Sera, Sera.”

The sessions ― drums, keyboards, bass and lead guitar ― were not bad but seemed a little bit lacking when it came to fine-tuning the amps and volume adjustments.

Bailey Rae has sold 4 million albums worldwide. The artist was nominated for the 2010 Mercury Prize for Album of the Year for “The Sea.”