“The Bank of England’s Monetary Policy Committee today voted to maintain the official Bank Rate paid on commercial bank reserves at 0.5 percent,” the central bank said in a statement after a two-day meeting.

Policymakers also opted against changing the BOE’s economic stimulus program, known as quantitative easing, under which it injected 200 billion pounds ($322 billion) into the economy.

Both decisions were in line with expectations. Official minutes from the Monetary Policy Committee meeting will be published on March 23, when the reasons behind the decisions will be disclosed.

“No surprises from the Bank of England,” said economist Hetal Mehta at Daiwa Capital Markets Europe.

“We do not think there was sufficient new data for the first quarter to have persuaded ... MPC members to have voted for an increase in rates at this stage.” 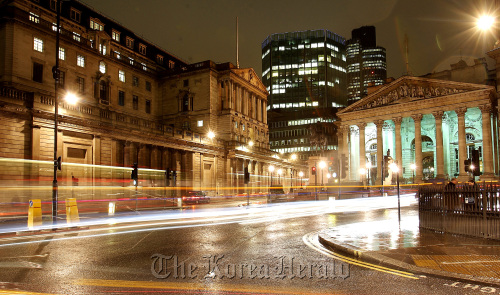 The Bank of England in London (Bloomberg)
The BOE’s decision came after the European Central Bank signaled that it would likely hike eurozone borrowing costs next month to fight soaring inflation.

The British central bank’s nine-member MPC has been torn this year between raising rates to combat above-target consumer price inflation ― or leaving them at a record-low level to aid recovery.

Two MPC members had voted for a rate hike in January and they were joined by another hawk in February amid mounting concerns over high inflation.

Annual inflation hit a two-year high of 4 percent in January, double the BOE’s target level, on the back of surging oil prices and food bills.

Since January, world oil prices have rocketed to their highest levels since late 2008, propelled by worsening violence in Libya and spreading unrest across the oil-rich Middle East and North Africa region.

Ahead of this week’s BOE decision, official data has hinted that the U.K. economy could be on the road to recovery in the first quarter of 2011.

“Despite heightened pressure on the Bank of England, with inflation now at 4 percent, a rise in interest rates today would have been a surprise,” said economist Nida Ali at accountancy firm Ernst & Young.

“Nothing that has happened over the past month would justify any member moving into the hikers’ camp.

“If anything, those who have been wavering would have been dissuaded from moving given the heightened uncertainty surrounding the troubles in North Africa and the Middle East and its impact on oil.”

At the same time, serious concerns remain over the plight of the British economy, which shrank by a worse-than-expected 0.6 percent in the final quarter of 2010.

The coalition government’s deficit-slashing austerity measures could also hamper economic recovery this year but the BOE will have drawn some comfort from a batch of upbeat economic data this week.

And the nation’s trade-in-goods deficit narrowed by more than expected in January as exports hit a record high, figures showed on Wednesday.

caption: Evening traffic is illuminated by street lighting as it passes the Bank of England (left) in London.