The Veloster is the company’s first vehicle with an odd number of side doors ― one on the driver’s side and two on the passenger side. 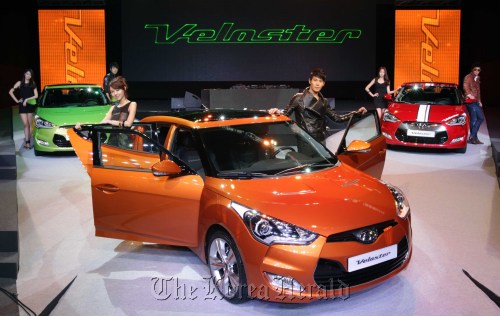 Hyundai Motor Co. launches its new compact passenger vehicle, the Veloster, in Seoul on Thursday. (Hyundai Motor Co.)
“We’ve developed the Veloster to satisfy young customers in their 20s and 30s who want individual styles on top of the driving experience,” Yang Seung-suk, the company’s president for marketing, told journalists.

Hyundai plans to sell only 18,000 Velosters in the local market every year, part of a marketing strategy to keep the model relatively rare on the roads.

It will hit the European market within the first half of the year and the North American and other overseas markets in the latter half.

The Veloster comes with Hyundai’s 1.6-liter Gamma engine, with an average fuel economy of 15.3 kilometers (9.5 miles) per liter.

Features include a button-start smart key system, a rear-view camera and a vehicle dynamics control system that automatically stabilizes the car in harsh driving conditions.