President Lee Myung-bak urged his government Tuesday to ramp up efforts to alleviate public worries over inflation, saying the problem is something of "the inevitable" under the current economic situations at home and abroad, according to his office Cheong Wa Dae.

"The consumer price problem has an inevitable aspect due to climate change, hikes in international law material prices, and other factors," Lee was quoted as saying in a weekly Cabinet meeting by Cheong Wa Dae spokeswoman Kim Hee-jung.

Lee added that all of the other nations, not just South Korea, are suffering troubles from inflation, she said. 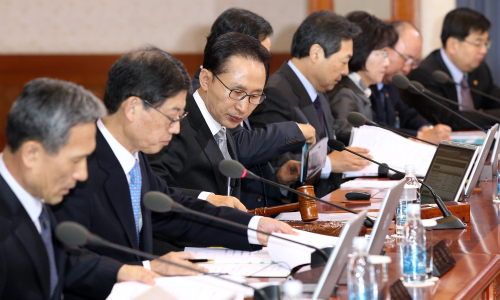 Skepticism is growing, however, as consumer prices jumped 4.5 percent last month from a year earlier, the steepest increase in 27 months, due to rising food, raw materials and energy costs that were partly attributable to the ongoing political unrest in the Middle East and North Africa.

The president instructed the related authorities to closely monitor situations in other nations and how they deal with inflation, the spokeswoman said.

"Only when the government does its best, (we) can get public support (in efforts to fight inflation) such as saving energy," Lee was quoted as saying.

Meanwhile, the president stressed that South Korea has still a way to go for improving the social status of women.