Though many dream of taking time off work for several months or even years to travel the world, not many have the courage to do so. But for some lucky photographers, global travel even makes them a living.

Three established photographers are holding solo exhibitions in Seoul to show beautiful photos of nature they took during their travels.

Hong, one of the few female photographers in South Korea, packed up her bags one day and flew off to the distant continent in 2006, leaving the museum where she worked as a curator for several years. She traveled around 13 countries including Mexico, Argentina, Chile and Peru for six months. 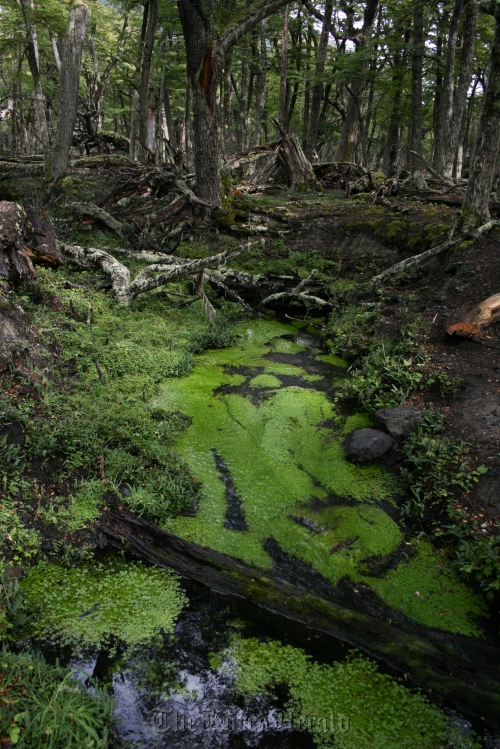 “Bahia Onelli, Argentina” by Hong Mi-sun. (Hong Mi-sun)
The results from her journey, which are on display at the exhibition “Light Journey,” might come as a surprise for those who expect a passionate Latin vibe in the landscapes.

The photos are, in fact, so calm and peaceful that they seem to be in black and white even though they are in full color. One that shows a puddle of dark green moss inside a deep forest, which Hong explained was surprisingly found right next to a giant blue glacier floating on water, is almost mystical.

“Among the many photos from the travel, I chose quiet ones that can soothe your heart. The landscapes I captured are those that touched me very much; either because they were so beautiful or because they were on the verge of disappearing, despite their beauty,” Hong told The Korea Herald at the opening of the show last week.

Over at Gallery Kong in Samcheong-dong, central Seoul, Michael Kenna’s black and white tree photographs allure visitors to go off somewhere and find their own tall trees to lie down under.

Kenna is referred to as a “landscape photographer,” especially known for his serene tree photos that are delicately highlighted with natural light. He still handles everything from photographing to printing the analog way. 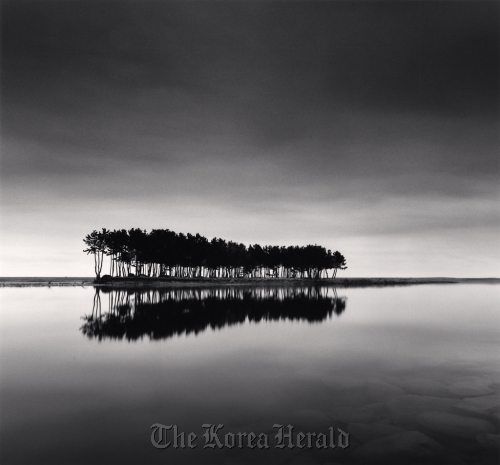 “Pine Trees, Wolcheon, Gangwondo, Korea” by Michael Kenna. (Michael Kenna)
The British artist has held over 600 exhibitions in world renowned museums and galleries during his 35-year career. He received numerous awards including the Chevalier of the Order of Arts and Letters from the Culture Ministry of France in 2000.

His current solo show, “Philosopher’s Tree,” displays 50 tree photos he has taken in North America, Asia and Europe since the 1980s.

Among the exhibits, there is one photo that is especially meaningful for Koreans ― a 2007 photo of the pine tree island in Samcheok in Gangwon Province. Kenna did not plan to take the photo; he just came across the island, thought it was beautiful and snapped a photo of it, which happened to be on the verge of being turned into a liquefied natural gas production plant.

Seeing the photo, many local photographers and civic groups started a movement to save the island. The government finally agreed to leave the pine trees intact but will still build the gas tanks at the back of the island.

“It is a pity that we will no longer see the natural landscape,” Kenna told the press on the opening day of the exhibition.

South Korean photographer Min Byung-hun will open his solo show “Waterfall” from March 13 to May 7 at The Museum of Photography, Seoul in Bangi-dong, eastern Seoul, to exhibit around 60 landscape photos as well.

Min is recognized in Korea for his gray-tone landscape photographs. At this exhibition, visitors will be able to see 72 photographs from his “Waterfall,” “Fog,” “Tree” and “Snow Land” series. Tickets range from 3,000 won to 4,000 won. For more information, call (02) 418-1315 or visit www.photomuseum.or.kr.