“He’s a businessman of good standing in Korean society and Bangladesh is trying to promote business and investment relationships with Korea. His contacts in the business circle will help us,” said Bangladesh Ambassador Shahidul Islam.

The trading figures seem very impressive at first glance ― over $1.2 billion in bilateral trade. However, the figure lies heavily on the Korean side with exports of $1 billion last year.

“We are lagging behind,” said Islam. “David Kim, our new honorary consul, will be very helpful.”

Trade is just one sector where Kim will be able to improve relations. 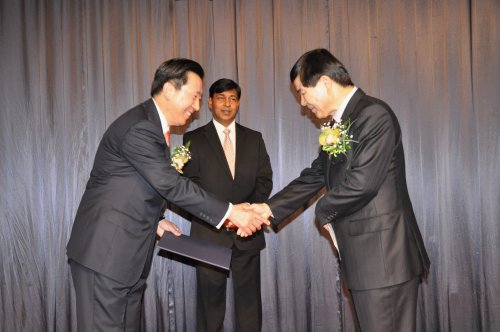 Bangladesh Ambassador Shahidul Islam (center) looks on as David Kim (left), the new Bangladesh honorary consul general for Incheon, receives his letter of acceptance from Foreign Ministry’s Director General of Southwest Asia, Pacific Bureau Park Hae-yun. (Yoav Cerralbo/The Korea Herald)
There are about 500 Bangladeshi students at various educational institutions in the country and Islam is hoping that Kim will assist him in solving problems that arise from time to time, scholarships and general support to the ambassador.

Most Bangladeshis in Korea work in the manufacturing sector.

There are 12,000 Bangladeshis working in Korea legally with another roughly 40,000 thought to be here illegally.

Kim said that he will try his best to help them.

Kim is a philanthropist who travels to Bangladesh to assist single mothers. He spent the Christmas and Lunar New Year holidays in Bangladesh.

“I’ve spoken to the KOICA people a number of times and met many Korean NGOs in Bangladesh trying to get an idea of the situation. I will try to do something for them,” Kim said to The Korea Herald.

For Kim, doing everything transparently is the only way to build a solid foundation.

He does admit that getting a license to operate charities from the Bangladeshi and South Korean governments will take some time but “is not impossible.”

Kim sees helping the less fortunate as his duty, be it in Korea or Bangladesh, no matter the time or money involved.

“The possibilities are endless,” he said.