The revolution in Egypt was not about an outside occupying force, nor was it just about socio-economic conditions. According to the Egyptian ambassador, it was about the fundamental rights of the citizens to be treated fairly and have a say in their future.

“People all over the world have the same aspirations: freedom, respect for human rights, democracy. These are the Western values and the values the protesters demonstrated for,” Egyptian Ambassador Mohamed Elzorkany told The Korea Herald.

The popular uprisings that began on Jan. 25 led to a wave of demonstrations, marches and acts of civil disobedience, labor strikes and clashes between protesters and the security services and supporters of the Hosni Mubarak regime.

As events unfolded live on television, the world witnessed a change that was simple and clear. Egyptians were not afraid anymore. They expressed their desire for democracy, fair treatment and freedom from their oppressors.

This was not the first time Egyptians went through a revolution that changed the face of the country. Back in 1952, a group of young army officers overthrew a pro-Western monarchy to set up a republic.

“This revolution (2011) was about injustice and domestic or internal occupation, so this was much worse. It was more heartbreaking for the Egyptians because the first revolution was because of a foreign force mistreating them. This time it was their own people mistreating them,” he said.

Television viewers witnessed atrocities by the secret police and a regime that was bent on keeping disorder to benefit their order.

“This was the first revolution in the world without a single incident of violence on the part of the demonstrators. There was violence by the regime. These are the thugs and the goons of the regime,” he claimed. 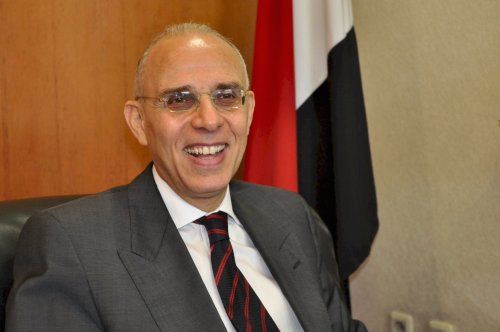 Egyptian Ambassador Mohamed Elzorkany (Yoav Cerralbo/The Korea Herald)
Pro-Mubarak supporters used horses, camels and even a stolen United States Embassy vehicle to mow down what were generally peaceful protests with the aim of intimidation, a tool used for three decades.

The protests were not just about money and the economy; a fact that was noticed on every sign posted by the demonstrators. There was a lack of anti-western, anti-U.S. or anti-Israel slogans. The slogans were simple ― to be freed from the clutches of a regime that was stifling its people.

Economically speaking, Egypt as a country was doing well, with GDP growth at 7 percent for the past three years.

“Not a single incident of attacks on Christians happened, not a single church was attacked. When the regime was there, sectarian strife was a daily practice. There were scenes that would make you cry,” said Elzorkany.

Instead, a brotherhood was formed; not one based on religious ideals but the core principle of treating your neighbor the way you would like to be treated.

“I almost cried when I saw this, when Muslims where praying, Christians stood around hand-in-hand protecting them until they finished their prayers. This was fantastic, and when Christians were performing their services on Sundays, Muslims did the same thing,” Elzorkany said while holding back tears of joy.

Unfortunately the path to freedom is not paved with flowers. Over 1,000 people died and 5,000 were injured.

“Some lost their eyes because the snipers that were used by the regime were aiming for the middle of the forehead or the eyes,” Elzorkany said.

Another positive development on the world diplomatic stage that came out of these protests was the wakeup call for the United States.

“The West, and the United States in particular, realized that their best allies anywhere in the world are the people and not the regimes.

“Now they realized that it’s these repressive regimes that were causing the instability in the region,” he said.

Mubarak is said to be worth anywhere from $30 billion to $70 billion. Libyan leader Moammar Gadhafi is believed to have amassed $130 billion.

“People were tired of the corruption. It permeated every level of the government,” Elzorkany said.

As soon as the Egyptian military took over after Mubarak stepped down, the big question on the peace treaty was answered. Egypt will honor its international commitments.

“But, Israel should now understand that dictators were defending their interests. This is not the case anymore. Now the peoples in the region would like to live with Israel in peace. The problem is that Israel does not take action towards solving this issue,” he said.

In 1973, former Egyptian President Anwar Sadat began the October War after his attempts for peace with Israel were rejected.

Sadat knew the only way to get Israel to the negotiating table was to regain a small amount of territory Egypt lost in the 1967 Six-Day War.

The war led to a re-engagement by the United States in the region followed by Sadat’s 1977 visit to Israel. Finally, a year later and after much shuttle diplomacy, peace was secured.

“We want to cooperate with Israel, we want to live in peace with Israel. We want to take every possible step to resolve this problem to make our world safe,” he said.

As for the Palestinian side and most notably Hamas, Elzorkany said that once signs emerge that the Arab-Israeli question is being solved, the rest of the Arab world will “force them (Hamas) to change their policy” of destroying Israel.

Extremists have been hijacking the Arab-Israeli conflict to serve their purposes, he said.

“Al-Qaida and Iran are using this as a tool to wipe out Israel from the map. (Besides them) No one wants to see that happen. Israel is a country we should respect. It’s accomplished a lot in a very short span of time, it’s a role model for development and democracy. But Israel has to take steps to resolve this problem.”

As for the reverberations that these demonstrations that started in Tunisia before moving to Egypt have caused, Elzorkany said that it is just the beginning.

“Freedom will come” to every part of the world, he said. “It may take time but it’s coming.”

Besides the Middle East and North Africa, pro-democratic movements are starting to emerge in China so much so that the Chinese government has clamped down not only on the internet, where messages about demonstrations are spread, but also on places where demonstrations are to be held.

“It’s like a pressure cooker, it’s simmering. There comes a point when it blows. No people should ever be taken for granted,” he said. “Human aspirations are the same. There is no value that is more dear to people’s hearts than freedom.”

In South Korea, activists are sending helium balloons toward the North containing messages concerning revolutions that toppled the regimes in Tunisia and Egypt.

As for Libya, Elzorkany applauds the actions taken by the United States and the United Nations.

Sanctions have been imposed and Gadhafi now faces investigation for alleged crimes against humanity by the International Criminal Court.

“I really appreciate that the UN is taking concrete steps to show that no one should get away with it,” he said.

“So thank God this revolution took place, thank God that Egyptians feel so proud of themselves. They feel free, dignified. They have restored their rightful status among nations, so they feel very proud now,” he said.