The country’s largest mobile carrier said it will take pre-orders starting Wednesday at its T World branches and online.

“We at SK Telecom are glad that we can introduce the iPhone 4 through Korea’s best network,” said Seo Jin-woo, chief of SK’s platform business division. “Customers will be able to enjoy more plentiful benefits through iPhone-customized plans and higher quality service (than KT’s).”

SK, which controls around half of the country’s wireless market, has been striving to stay ahead of the smartphone competition since KT launched the hugely popular iPhone in Nov. 2009.

SK’s launch comes as part of a string of Apple’s early breakups with exclusive distributors in an effort to defend its share in major markets. 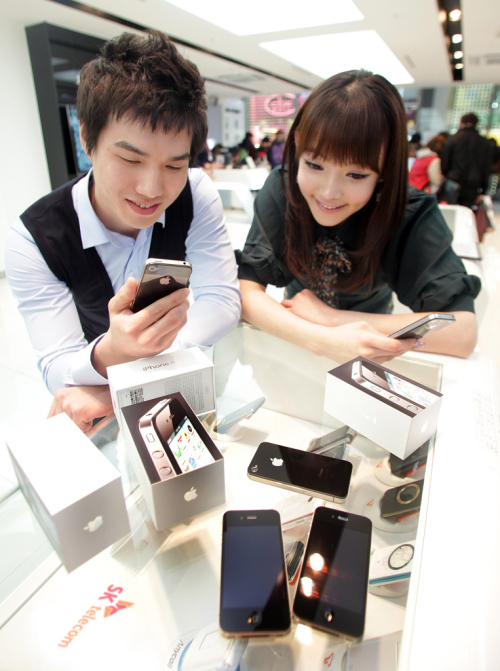 It also broke a two-year exclusive agreement with the U.K.’s O2 in late 2009 and began working with T-Mobile and Orange.

“Over the past year we have moved a number of markets from exclusive to non-exclusive,” Apple’s chief operating officer Tim Cook told investors last year. “In each case as we have done that we have seen our unit growth accelerate and our market share improve.”

In Korea, network coverage and customer service will determine the winner of the smartphone race, industry watchers said, given that both SK and KT are back to square one with the same market-blowers like the iPhone and Samsung’s Galaxy series.

The two telecom operators are working to launch the fourth-generation network to provide faster and easier data service this year.