At the hotel’s theater, a high-resolution 16-by-7.5 meter screen with a 7.1 surround audio system will play the Metropolitan Opera’s 2010-2011 season programs, including all-time favorites such as “Turandot” from March to December, the hotel said.

The theater’s Met Opera Brunch program will be offered six or seven times each month until December.

In March, the theater plays Puccini’s “Turandot” on weekends (March 13 and March 20) and Offenbach’s “The Tales of Hoffmann” every Tuesday (March 8, 15, 22 and 29). The two stories are well known to most opera lovers and will also serve as a good introduction to opera for those who are trying it out, hotel officials said.

“Turandot,” the last work of Italian filmmaker Franco Zeffirelli, has topped the rankings of Met opera favorites for years. It is based on a story of the cold Chinese princess Turandot, who orders the killing of suitors who cannot solve her riddle. Maria Guleghina played Turandot and Marcello Giordani played prince Calaf. The aria “Nessun Dorma” Calaf sings for Turandot is especially famous. 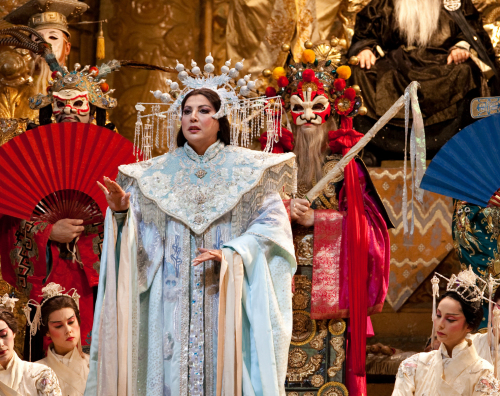 A scene from the New York Metropolitan Opera “Turandot.” (Sheraton Grande Walkerhill)
“The Tales of Hoffmann” was directed by Tony Award winner Bartlett Sher, recognized for his successful directing of Season 2006-2007 Met opera “The Barber of Seville.” The opera was conducted by James Levine with lead role played by Joseph Calleja, the winner of 1998 Caruso competition in Milan.

The hotel said the Met Opera Brunch program will renew opera pieces and the brunch menu every month. For details, call (02) 455-4880.