Analysts have widely criticized the Monetary Policy Committee of the central bank, accusing it of missing the opportunity to make timely increases in the interest rate since the latter half of 2010.

Woori Futures research analyst Choi Dong-cheol said on Friday that the bank has already missed the best timing for a hike by freezing it in February.

“If the BOK decides not to raise the rate this time again, it would be a complete loss of the timing,” he said. “To minimize the market sentiment over inflation, it should have raised the rate for the last two months.”

He said, “Even if the bank finally raises it this month, effects on the financial market would be minimal as it would be a belated action.” 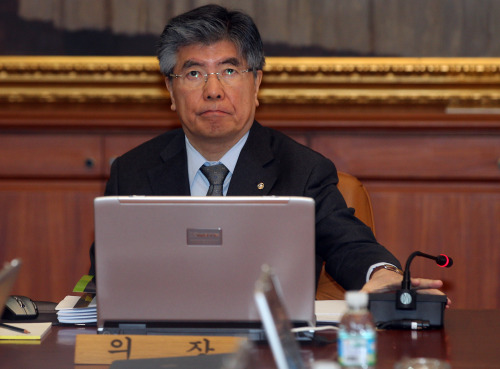 Consumer price growth exceeded the 4 percent level for the second consecutive month ― 4.1 percent in January and 4.5 percent in February.

There are predictions that it will approach the 5 percent mark this month in the wake of soaring international oil prices.

But the benchmark interest rate stayed at 2.75 percent after the BOK hiked it by 25 basis points in January.

While ministries including the Finance Ministry have put priority on price stability, an SK Securities analyst said the government has failed to map out any suitable measure to tame prices.

Amid the situation, unionized workers of the central bank have recently criticized BOK Governor Kim Choong-soo for his policies.

Staging a protest last month at the bank’s headquarters in downtown Seoul, they claimed that their bank has seen its independence seriously undermined since Kim took office last year.

Earlier this month, a local newspaper issued allegations that the BOK made a low-key report, which might be used for behind-the-scenes policy coordination with the presidential office.

In the meantime, a BOK director general downplayed the criticism that they had missed the best time to raise the key rate.

“Only the future situation in the coming months will tell whether or not our monetary policy was appropriate,” he argued.