A group of prospective judges, prosecutors and lawyers on Wednesday raised their voices against the government's recent decision to employ law school graduates as state prosecutors, refusing to take part in the admissions ceremony for the national judicial training center.

Under the current judicial laws, after passing the national bar examination, some 1,000 prospective judges, prosecutors and lawyers undergo a two-year training period at the Judicial Research and Training Institute (JRTI) run by the Supreme Court. Some outstanding trainees are selected to become judges or prosecutors, and others choose to practice law.

In 2007, the government passed a law to create U.S.-style three-year law schools and the old system of selecting law professionals by examination is expected to be phased out.

In line with the law school system, the Ministry of Justice said last week that it is considering a plan to appoint excellent law school graduates to the posts of state prosecutors without additional examination. 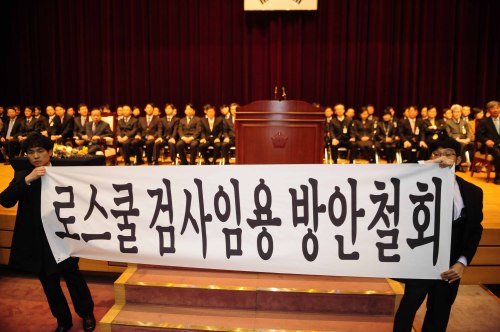 Members of a new class at the Judicial Research & Training Institute hold a placard against the government's policy to give priority to law school graduates in appointing prosecutors on Wednesday. (Park Hae-mook/The Korea Herald)

A total of 974 students were expected to begin their term on Wednesday, but only half of them took part in the ceremony, according to officials.

Some 150 trainees, who did not attend the admissions ceremony for the new semester, held a rally and demanded the government scrap the plan.

"We want fair competition between law school students and us, regardless of their background," said a trainee at the JRTI. "There will be many bar exam dropouts and children of 'high-ups' in law schools. People won't agree to the new appointment plan."

The JRTI said that it is looking into the incident but has not decided how to deal with the absentees.

The trainees have already acquired positions as civil employees from March 1 and the mass absence will not affect their status, officials said.

The Justice Ministry said that it intends to name law school graduates as prosecutors after they pass a bar exam and undergo an internship program, and the detailed plan is still undecided.

"Now, we have two different systems to educate law professionals as law schools were introduced and law school graduates deserve to have a chance to become state prosecutors," said a ministry official. "But we will collect more various opinions before making the final decision."

The JRTI, established in 1971, is designed to further the education of those who have passed the bar examination before entering the legal profession. It is the only educational institution for the bench and the bar in Korea, having produced a total of 10,468 legal professionals in the past 30 years.