Korea Resources Corp. is at the forefront of Korea’s drive to secure stable supplies of natural resources including rare earths crucial to its high-tech economy.

Kim Shin-jong, chief executive of the state-run mineral developer, said the company will increase its investment in overseas resources development by 22 percent to 450 billion won this year. Its new projects will focus on Africa and South America, both of which have huge untapped reserves.

“Africa and South America are ‘lands of opportunity’ for resource-scarce countries like Korea, although local developers have so far been reluctant to do business in the two regions due to physical distance and unfavorable investment conditions there,” Kim said in an interview with The Korea Herald. 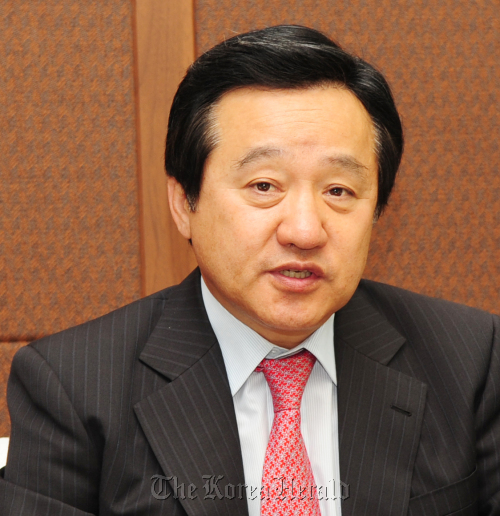 Kim Shin-jong
Since Kim, a former government official, took office in 2008, KORES has been making strides in offshore minerals development.

The firm is currently involved in 33 projects in 15 countries including Madagascar, Peru and Australia.

Korea has been striving to reduce its dependence on Chinese rare earths, especially since the country curbed exports last year, ringing alarm bells on the possible impact a shortage of the commodities would have on Korea’s economic backbone industries of electronics, automobiles and fine-chemicals.

China has held a virtual monopoly on rare earths, providing 97 percent, or 124,000 tons, of the global supply. Beijing has often used this for diplomatic leverage.

Prices of such materials have risen sharply worldwide with their demand surging and supply limited. The price of cerium, widely used in LCD panel production, has risen from $7,050 per ton in July 2010 to $51,950 in November.

With the global economy recovering and new electronics businesses surging, demand for rare earths will continue to rise at an annual rate of 9 percent to reach 19,100 tons in 2014, according to Industrial Minerals Company of Australia.

Korea imported its entire domestic rare earths supply of 2,600 tons from China as of 2009, according to data from the Korea International Trade Association. 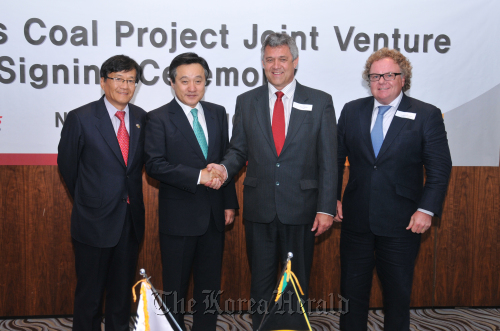 KORES CEO Kim Shin-jong (second from left) shakes hands with Continental Coal CEO Don Turvey after signing a $13.8 million deal to buy a stake in a bituminous coal mine in Vlakplaats, South Africa, in October. (KORES)
The government has thus been pushing aggressively for new overseas supplies and stepping up research to recycle and substitute rare earths with other materials.

The government plans to increase its reserves of rare metals from the current 3 tons to around 1,200 tons by 2016, looking for other sources than China such as Africa and South America.

The KORES CEO said Korean developers, with the country’s advanced technologies and rich experiences of economic development and infrastructure construction, can be better positioned than those of China, Japan and India.

“Utilizing package deals ― where we combine infrastructure-building with resources development ― can give us a comparative advantage. Also, there are multiple developing nations which desire to learn from the country’s rapid development experience,” Kim said.

The firm so far has achieved some notable performances in that regard.

“We have earned rights to develop lithium, crucial for secondary batteries used for electric cars ― at mines in Bolivia, Chile and Argentina, which are known to have the largest reserves of such materials in the world,” Kim said.

Most recently, Korea signed a bilateral accord with Bolivia in a summit in August which allows Korean companies to take part in the South American country’s lithium resource development.

Alongside rare earths, KORES has been trying to boost self-developed output of major metals including copper ore and coal to 29 percent within 2011, from about half the figure in 2008.

Yet Kim called for more active cooperation among local firms in overseas resources projects, as such ventures are not easy to attain on their own.

“Resource development is a risky, costly business. I think local developers, which are smaller in size and had a later start than most other foreign ones, will create a synergy effect when we work together in a cooperative, rather than competitive, manner,” he said.

Kim cited an example, saying that a consortium of nine Korean firms including KORES and Korea Electric Power Corp. submitted a bid for a development of Mongolia’s Tavan Tolgoi mine on Jan. 31. The mine is said to have the world’s largest untapped deposits of coal for making steel with around 1.2 billion tons.

He has high hopes for the bid, he said, as the group’s offer seems to be the most suitable fit, combining railway construction and mine development.

Korea is a relative late-comer in the global competition for resources. Partly to overcome the disadvantage, Kim personally has been executing a hands-on management style and making an extra effort to make a deal.

He spends around half of every year overseas as he had vowed when he took the post.

“To secure scarce resources, executing localized management is crucial. I’ve been to Bolivia, which has the world’s largest amount of lithium reserves, seven times so far and plan to keep doing so during the remaining six months of my term,” Kim said.

-Since 1978, Kim has served in diverse government posts related to resources and energy at the Ministry of Knowledge Economy (formerly Ministry of Commerce, Industry & Energy).

-He was a key advisor on energy and climate change policies to President Lee Myung-bak as a member of Lee’s presidential transition team in early 2008.