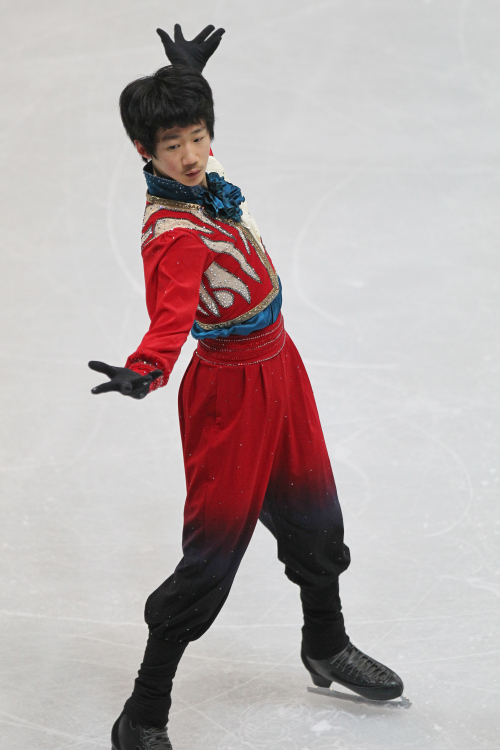 His hands were shaking. Although he fought to compose himself, it wasn’t easy for the 14-year-old skater.

“I was very nervous as this is my first time at Junior Worlds,” Lee said after completing his free skating program.

Only eight years after he first learned to figure skate, Lee is now one of the leading male figure skaters in this country.

The Korean national team skater pulled off his best performance last season, notching up a fourth place finish at the Junior Grand Prix in November to earn berth for the first time at the world championships.

But the teenage figure skater admitted that his debut performance on Monday was a bit disappointing.

“I missed my jump and made a few mistakes because of the injury to my knee,” Lee explained.

“I could’ve done better,” he added.

In spite of the injury, however, Lee pulled off a triple Lutz-triple toe and three more triples in his free skating routine set to the theme from “The Pirates of the Caribbean.”

He lost his balance after the second triple Lutz, but managed to score 97.99 points to finish seventh in the preliminary round.

The score was far less than his personal best of 113.33, but was enough to qualify for the next round.

On Monday, 27 junior skaters competed in the men’s single preliminary round and 14 qualified for the next round.

Now, with skaters that placed in the top 16 of the 2010 Championships having qualified automatically, 30 men’s singles competitors will compete in the short program on Wednesday. Then, only the top 24 contenders will have the chance to skate in the free program on Saturday.

“I’m more relaxed now, and I feel I can really pull it off next time,” Lee said.

The young skater, however, acknowledged that he still needs more time to become a top-level skater.

“I don’t expect to win this competition, but hope to show my best performance.”

But the teenager added that he has an ambition to move to a bigger competition and follow the success of the Vancouver gold medalist Kim Yu-na.

His initial goal is to make it to the Junior Grand Prix final this year.

He then wants to be a junior champion.

“I want to qualify for the 2014 Winter Olympics and win a medal, that is my dream,” he added.