The company has run a trial service in China and Japan since December. As the service proved popular among overseas visitors, the company has decided to expand it to Taiwan, Hong Kong, Macao, the Philippines, Thailand, Singapore, Vietnam, Indonesia and Guam.

The country’s No. 1 fixed-line service operator also announced that it will provide its signal-converting “Egg” service in 74 major cities in the U.S. and 48 large cities in Japan for 10,000 won on a daily basis.

KT’s Egg is a device that converts the wireless broadband signal to a Wi-Fi signal, allowing people to use the Internet for free, if they are located at a Wi-Fi zone.

The new event takes place as the number of the company’s smartphone owners has been on a high rise, jumping to 3.48 million in late February, from 2.45 million last year.

“KT is sure to win a great response from customers who use smartphones or tablet PCs as the company plans to extend its unlimited data roaming promotion events to those countries its customers visit frequently under close cooperation with member companies of Conexus Mobile Alliance, which is a consultative body composed of mobile service operators based in the Asia Pacific region,” a KT official said. 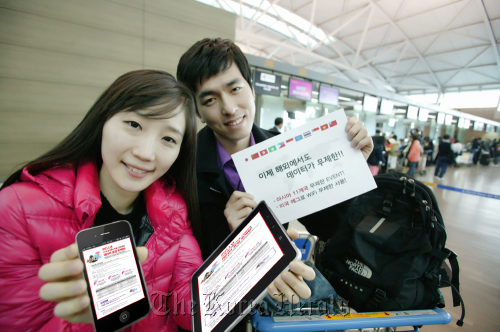 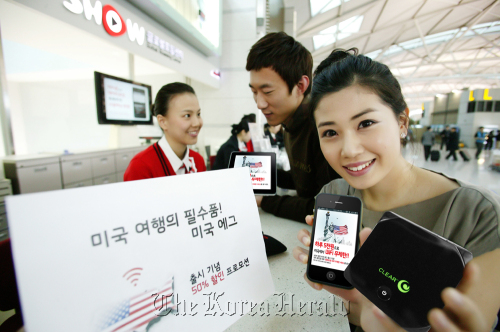 A model introduces KT Corp.’s Egg device at Incheon International Airport on Tuesday. (KT Corp.)
As an exemplary case involving the use of the company’s Egg, an office worker who only identified himself by his surname Kim recalled how convenient and cost-saving it was to use the Egg when he went on his recent business trip to Sam Francisco and Los Angeles.

“I picked up a rental car to go by myself and I was able to use the Google maps service to find the routes with the Egg I borrowed ahead of time,” he said. “It would have cost me much more to borrow a separate navigation system.”

He also said that he frequently made use of mobile applications that helped him find cheap parking and places to eat, while also keeping in touch with his family and friends through the mobile messenger.

“I was overall very satisfied with the use of Egg,” he added.

Another office worker who visited Hawaii also claimed the Egg that she borrowed showed near-perfect coverage in the many different parts of the state.

“It was more than surprising to see that the telecommunication services were available even at the very top of the Haleakala Volcano, even if it was a weak signal,” she said.

KT officials said that the Egg service, which aims to offer unlimited wireless Internet service overseas, has attracted customer interest through micro-blogging site Twitter and online communities before its launching.

The Egg service was previously launched in Japan in October of last year, triggering positive response from many users.

The service covers major cities in the U.S., such as Washington, Chicago, New York and Los Angeles, and cities like Tokyo, Osaka, Yokohama, Sapporo, Kobe and Kyoto in Japan.

The company also offers a service limiting data roaming rate upon request which automatically shuts down if the data roaming capacity ― 100,000 won per month ― has been reached.

It goes a step further to provide a number of data roaming packages that differ in rates and the capacity of 3G data roaming. It equally gives 100 megabytes of free Wi-Fi roaming service.

“Due to such efforts, the people using our roaming service has doubled last year compared to 2009 and the data roaming traffic during the same period has surged up to 10 times,” said a KT official, adding that this is a high figure considering that the roaming voice traffic has merely increased 0.5 times in the period.

Those who are interested in the company’s roaming service can either contact its roaming customer center at 1588-0608 or visit the roaming center at the airport.