In Group F, FC Seoul travels to the United Arab Emirates to take on Al Ain.

By countries, South Korea has been the most successful one at the annual AFC events, with nine titles by K-League representatives. In 2011, the year of the rabbit, South Kor ean coaches are keen on catching the proverbial two rabbits ― winning both the K-League and the AFC titles.

“I’ve worked to build a squad deep enough to handle both competitions,” said Yoon Sung-hyo, head coach of Suwon. “We’ve got a young team, and players have worked hard to build stamina for a long season.”

National team goalkeeper Jung Sung-ryong and former national team forward Choi Sung-guk are two main offseason acquisitions for Suwon, which was among the busiest clubs in the market this winter.

Jung tended the net for Seongnam Ilhwa Chunma, the 2010 AFC champ from K-League, and Yoon said he hoped the experience will help his team this year. 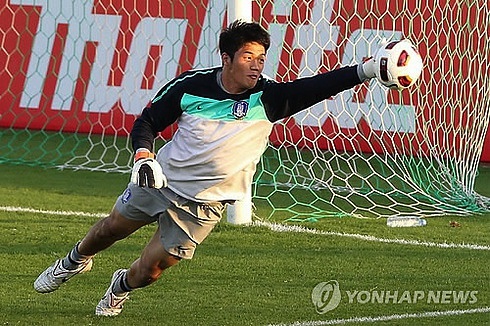 Suwon goalkeeper Jung Sung-ryong     (Yonhap News0
There are eight groups of four teams in the opening stage, and teams face each other twice in a home-and-away format. The top two clubs from each group will make up the round of 16.

Coach Yoon’s approach to constructing a deep team is a good one, as the Champions League does place an extra burden on clubs. The AFC event stretches well into the fall. Teams play only two group matches per month as the AFC tries to accommodate their playing schedules in their respective domestic leagues. The K-League clubs’ next group match will be during the third week of March. But add K-League regular season matches every weekend plus auxiliary K-League Cup and FA Cup games on weekdays, and teams can be stretched thin.

Doing well in both the K-League and Champions League is not easy. Seongnam is the only K-League team to have pulled off the double, doing so in 1995 at the tail end of its dominant run.

“Away matches in the Champions League aren’t easy, in terms of stamina and physical conditioning,” Yoon said. “But we have to overcome these problems if we want to be No. 1 in Asia.”

Lifting the continental trophy is considered more prestigious to some than winning the domestic league ― to an extent that certain teams, such as the 2010 Seongnam, make no secret of their intentions to concentrate on trying to win the AFC event over the K-League.

But the K-League teams that are competing this year all know the importance of doing well at home. By the quirks of the rules, champions at the AFC tournament aren’t always guaranteed a chance to defend their titles. They also have to perform in the domestic leagues.

Seongnam won’t get a crack to repeat after finishing fifth in the K-League last year. Only the top three clubs in the league play plus the FA Cup winner qualify for the AFC competition.

“It’s too bad Seongnam can’t play this time despite winning it all last year,” said Park Kyung-hoon, head coach of Jeju, the K-League runner-up last year. “Both the K-League and AFC Champions League are very competitive, and I feel they’re both important and we should really go after the two rabbits.”

FC Seoul did the double at home last year, winning the K-League championship and the K-League Cup. But the AFC event hasn’t been too kind to the four-time K-League winner. FC Seoul was a runner-up in 2001, but has gotten past the group stage only one other time, reaching the quarters in 2009.

“FC Seoul is the best team in Korea, but we have not won the Champions League yet,” Hwangbo said. “We will do our best to win it this year. We are not heavily concentrating on any particular competition, but we will try to win both (the league and the AFC event).”