Here for his bi-annual visit to Le Cordon Bleu’s Korean campus, Andre J. Cointreau ― president, CEO and MD of the prestigious culinary institution ― revealed a desire to change up the curriculum with a program devoted to Korean cuisine.

“We have now opened a Thai cuisine classical cycle in Le Cordon Bleu,” Cointreau told The Korea Herald during an interview at Le Cordon Bleu-Sookmyung Academy on Tuesday. 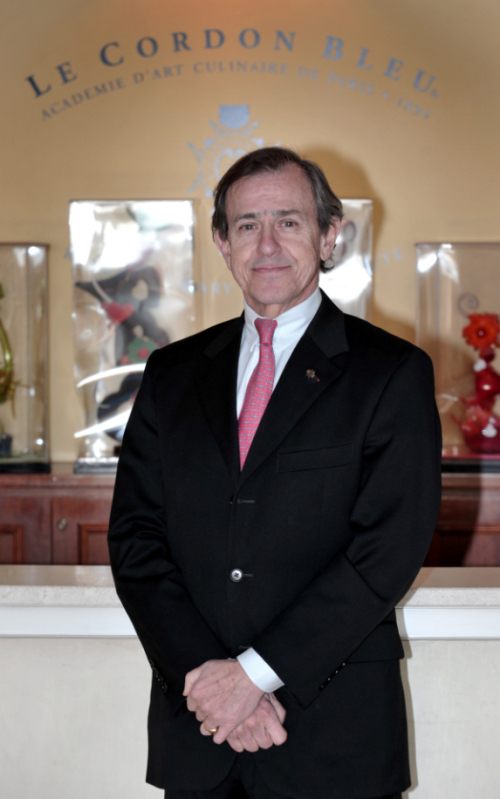 The 62-year-old CEO expressed interest in launching a similar program for the Korean campus.

“But we are saturated in square meters,” Cointreau cited a lack of space as a current obstacle.

For now, hansik plays a minor role at Le Cordon Bleu-Sookmyung, where intermediate level students learn how to apply the techniques they have learned to Korean ingredients through approximately two lessons.

Considering the increased local presence of prominent culinary schools like tsuji+1 ― a private academy created by PDP Wine Co., LTD. from the know-how of Japan’s famed TSUJI Group ― Cointreau may want to differentiate his institute from potential competitors with new courses like Thailand’s professional program.

The CEO, however, seemed unfazed by changes in South Korea’s culinary education industry.

“We are not really afraid of any kind of competition for the time being,” he said.

Drawing from 25 years of experience as the head of the 116-year-old institution, Cointreau is intent on expansion.

This year alone, plans are to open 11 schools and departments even though there are already schools in 15 countries. His vision is aligned with what he calls “a worldwide tsunami of interest in gastronomy and the entrepreneurs behind it.”

Cointreau said chefs are “far more involved than we think.”

“Chefs of today are working with the whole production side,” he explained, elaborating how they even influence the manufacturing of kitchenware like pots and pans. “We need the chef to tell us how to use them.”

Indeed, prominent chefs have surpassed the realm of fine dining and become deeply entrenched in cuisine on a much broader level.

For example, Wolfgang Puck has his own line of gourmet food products and in 2005 famed French chef Michel Bras helped produce kitchen knives in collaboration with the Japanese company KAI.

With chefs wielding an ever larger sphere of influence, it seems only natural for Cointreau to want to foster more aspiring chefs by opening more schools worldwide.

It helps that Le Cordon Bleu recently got its fair share of the limelight in Hollywood.

In 2009, Nora Ephron’s hit flick “Julie and Julia” recaptured the magic of Le Cordon Bleu alumna-and-American cooking queen Julia Child during her gastronomic infancy at the institute’s first school in Paris. The film, an adaptation of Child’s autobiography and a memoir by Julia Child-devotee Julie Powell, starred Meryl Streep as the famed chef and was a box office success.

“I do not think that 10 years ago there would have been a film with Meryl Streep on Le Cordon Bleu,” said Cointreau, asserting how “Julie and Julia” is very much a sign of its times, times where the passion for food and its creators has infiltrated every corner of the world, including South Korea.

“I’ve been coming here for more than 10 years,” he said of his bi-annual visits to South Korea.

In Cointreau’s opinion, a decade ago chefs here were more or less seen as “a cook with no recognition.”

“Food was not really looked at as art,” he explained.

Now, the importance of good food and chefs has been receiving “true recognition.”

In fact, Cointreau believes that Seoul’s fine dining scene is “absolutely” ready for a Michelin Red Guide, should such an opportunity present itself.