Yet at Sunday’s Academy Awards, there’ll be trophies for categories from best director to makeup ― but none for casting directors. While the Television Academy gives Emmy Awards for casting, and the Film Independent Spirit Awards honors casting directors in movies, the Academy of Motion Picture Arts and Sciences does not.

That frustrates a number of casting directors, including several who worked on this year’s best picture nominees. They think it’s time for Hollywood to do more to recognize a profession they say is little understood by the moviegoing public and often taken for granted in the film business.

Creating an award would be “a great idea,” said Nina Gold, casting director for “The King’s Speech.” “Honestly, it’s an incredibly thankless job ― or anonymous.”

Three times in the last 15 years, casting directors have proposed to the academy’s awards rules committee that a trophy be added, but they’ve been rejected each time.

Bruce Davis, the academy’s executive director, said the problem is that frequently, “there’s no easy way to tell who did the casting in a movie.” Producers and directors have considerable influence over casting, he said, and big-studio film projects often develop around a star who commits to the movie long before a casting director is hired. 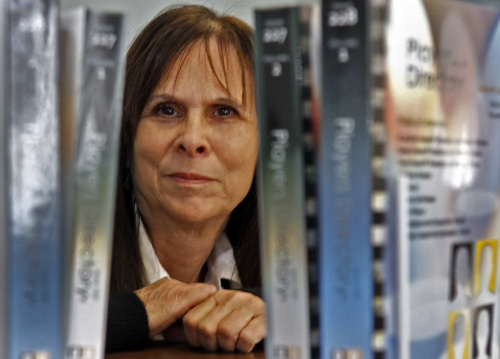 Pam Dixon longtime film and television casting director and executive, who also serves as president of the board of the Casting Society of America, photographed in her office on Feb. 18 . (Los Angeles Times/MCT)
“It’s not that we don’t respect casting directors, it’s that we don’t know how to” create an Oscar category, he said. Besides, Davis added, “We’re not looking for a lot of new categories. People think the award show is long enough.”

Many casting directors believe that the absence of Oscar recognition reflects a broader lack of understanding about what they bring to filmmaking. “People don’t know about it. They just go to the movie and the average person has no clue,” said Pam Dixon, an academy member and president of the Casting Society of America, a group of 425 casting directors in film, TV and theater in the U.S., Canada, Europe and elsewhere.

Dixon recalled that years ago, when she told her mother she’d been hired as head of casting for ABC, her mom said: “Really? You’re going to do something with fishing?”

“I don’t think we do (the job) for the pat on the back,” said Debra Zane, whose credits include “American Beauty” and “Indiana Jones and the Kingdom of the Crystal Skull.” “But when you are at a premiere, or a cast and crew screening ... and they mention every single department head and ask them to stand except the casting director, you kind of go ‘Agh!’”

To casual filmgoers, the job title may conjure visions of a harried clipboard toter presiding over “cattle call” auditions or lurking at Schwab’s Pharmacy in search of the next Lana Turner. The reality is far different, said Dixon, whose credits include “Gosford Park,” “The Mask of Zorro” and the upcoming “Green Lantern.”

This year’s group of best picture nominees provides a window into the subtle challenges of casting a film, such as auditioning 300 actresses to fill the demanding lead part of a heroic adolescent trying to unravel a deadly mystery (“Winter’s Bone”) or assembling a group of actresses with the talent, Boston accents, pugnacious ‘tude and familial resemblance needed to portray seven real-life brawling Irish American siblings (“The Fighter”).

Sheila Jaffe, casting director of “The Fighter,” had to sort through scores of actresses and draw on her mental Rolodex to find the right women. “We had pictures of the real sisters and we would lay them out, and it was real challenging,” she said. “I had to dig deep in my memory bank. It wasn’t like looking in IMDB” ― the Internet Movie Data Base.

Casting directors say that if they do their job well, the actors fit together so organically that audiences may not realize someone had to assemble them. And because the casting director’s work is complete before shooting starts, “by the time they’re making the film, everybody’s kind of forgotten about you,” Gold said.

Some casting directors prefer that relative anonymity, at least to a degree. Kerry Barden and Paul Schnee, who cast “Winter’s Bone,” said they like it when someone Googles their names and the search results yield pictures of Jennifer Lawrence, the film’s Oscar-nominated star. “We’re behind the camera for a reason,” Schnee said.

Another reason why casting directors’ work remains obscure is that the job has no clear training path. (Dixon said she knows of no college program in the field.) Gold got her first casting gig as a Cambridge University student when she rounded up 50 guys in leather jackets to be extras in an AC/DC video. “With music videos, you didn’t need much knowledge. You just need to be able to work 48 hours on the trot and be able to persuade people to do ridiculous things,” she said.

One measure of a good casting director is if a top director keeps hiring him or her. Ellen Chenoweth, who assembled the cast of “True Grit,” has worked with its directors, Joel and Ethan Coen, for years, including on the brothers’ Oscar-winning “No Country for Old Men” (2007).

Laray Mayfield, casting director of “The Social Network,” has been working with director David Fincher since he started doing music videos in the early 1980s. They have since collaborated on “Fight Club” (1999), “The Curious Case of Benjamin Button” (2008) and the upcoming remake of “The Girl With the Dragon Tattoo.”

“It’s very intimate, our casting relationship,” she said. “We spend a good amount of time just talking through the characters and how we see the work.”

Fincher credits Mayfield with helping him keep an open mind about certain roles in “The Social Network.” He said he’d initially told her, “Don’t bring me any of these Disney kids. ... I want real people!”

But Mayfield had spotted Brenda Song on the Disney Channel sitcom “The Suite Life of Zack and Cody” and thought she’d be perfect as a flaky girlfriend of lead character Mark Zuckerberg’s best friend and business partner. Mayfield also helped hatch the idea of having one actor, Armie Hammer, play the Winklevoss twins, Zuckerberg’s lookalike nemeses, with the aid of digital technology and a body double.

Fincher favors the idea of a casting Oscar, even though he says it’s often difficult to separate a casting director’s work from that of a director in relationships as close as his and Mayfield’s. “It’s hard for me to see where her job ends and my job begins,” he said.

Other directors also believe casting directors should share in the spotlight. When “The King’s Speech” won seven trophies at this month’s British Academy of Film and Television Arts awards, Tom Hooper thanked Gold and declared there should be a citation for casting.

“It was lovely,” Gold said. “It was like winning an imaginary award.”