MARANA, Arizona (AFP) ― Top seed Lee Westwood and No. 4 Phil Mickelson were among the surprise losers in the second round at the Accenture Match Play Championship on Thursday.

Only three of the top 10 seeds are still standing ― No. 2 Martin Kaymer, No. 5 Graeme McDowell and No. 9 Luke Donald.

Perhaps the most intriguing winner was Italian Matteo Manassero, at 17 the youngest player in the field. 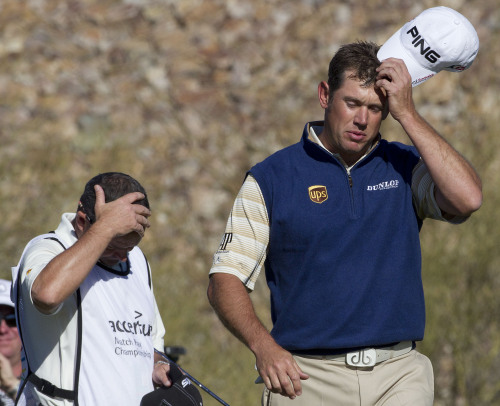 Lee Westwood (right) reacts after losing to Nick Watney during the second round of the Match Play Championship golf tournament Thursday in Marana, Arizona. (AP-Yonhap News)
Westwood did not play badly, but nonetheless continued his poor record in this event, having never advanced past the second round in 11 attempts.

He did not play badly, far from it, but in the end was edged 1-up by American Nick Watney.

“I think we were pretty even tee to green. Nick just holed a few more putts than me. I didn’t putt particularly well, certainly not well enough but that’s the way match play goes.”

Watney, the 32nd seed, was relieved to win: “I played very well, especially at the start,” he said.

“I got a couple up but he’s not the world’s No. 1 player for nothing and I knew he would come back.

”I know Lee’s record and I knew he was going to be tough. It’s very satisfying.”

Mickelson, meanwhile, was no match for fellow American Rickie Fowler, an emphatic 6 and 5 winner.

“He hit a lot of great shots,” said a philosophical Mickelson. “Certainly I got outplayed, that’s obvious.”

Fowler fell behind after three holes but that was the only hole he lost.

“I turned things around with two birdies and Phil left a couple of doors open that I took advantage of,” Fowler said.

Manaserro was also a 1-up winner, fending off South African Charl Schwartzel.

“It’s a big sense of achievement for me,” said Manassero, whose lack of length off the tee has not hindered him so far.

“If I make a few more putts, it’s going to be absolutely perfect. I’m really confident on my game, which is very important.”

Kaymer also had to work hard to win, fending off Englishman Justin Rose at the 20th hole in the day’s only match that went extra holes.

“It would have been tough if I lost,” said Kaymer. “I was playing very good golf but he came back really strong on the back nine and made a lot of putts.It was a good fight.”

Perhaps the biggest upset was Rory McIlroy’s defeat, not so much because the No. 7 lost, as the way he was unceremoniously humbled by American Ben Crane, 8 and 7.

Els lost to J.B. Holmes when his putt at the last horseshoed out, while Dane Thomas Bjorn also bowed out, a day after eliminating Woods.

The lower seed won eight of 16 matches. Eight Americans advanced to the final 16, along with five Europeans, two Australians and one South Korean.