In addition to well-known activists who apparently remained in custody after being taken away ahead of the planned protests on Sunday, at least three people were detained on charges of “inciting subversion of state power,” according to the Hong Kong-based Information Center for Human Rights and Democracy. China often uses the vaguely worded charge to lock up outspoken government critics. 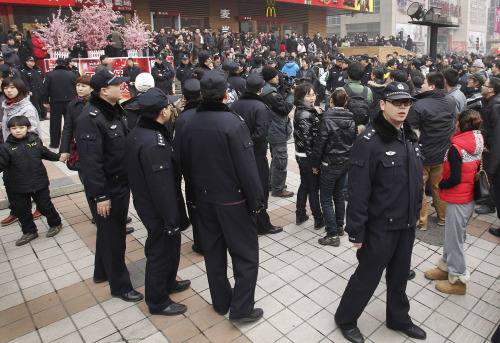 Police officers stand watching people gathering in front of a McDonald’s restaurant which was a planned protest site for “Jasmine Revolution” in Beijing. (AP-Yonhap News)
This is to resolve social conflicts, maintain social stability, and promote social harmony,” Xi said, echoing remarks over the weekend by president and party leader Hu Jintao.

State media also quoted a top government adviser as dismissing the possibility of a Middle East-style revolution in China as “ridiculous and unrealistic.”

“It’s fair to say that many problems are being solved,” Zhao Qizheng was quoted as saying by the Xinhua News Agency.

The detentions indicated Beijing would not tolerate any dissent, even by people merely reposting information gleaned from overseas websites.

Liang Haiyi, an unemployed 35-year-old woman in the northeast city of Harbin, was taken away Saturday after putting information about the call to protest on Chinese websites or chatrooms, said lawyer Liang Xiaojun, who was not representing Liang but had spoken to her ex-husband about the case.

She was questioned and taken away in handcuffs, and her ex-husband has received an official notice saying she has been charged with subversion, said the lawyer, who is not related.

“I don’t think she’s broken any law, she only reposted someone else’s writings on the Chinese Internet and it wasn’t her own writing,” Liang Xiaojun said. “Anyone overseas can see these materials.”

Also detained for spreading word of the planned protest online were Hua Chunhui, from Wuxi city in eastern China, and Chen Wei from Suining city in the southwest, the Hong Kong rights group said in a statement Wednesday.

Though only a handful of people responded to the protest calls this past weekend, the unidentified organizers renewed the appeal to gather peacefully in parks or near monuments at 2 p.m. on Sundays.

For the protest-shy, it said people could participate by simply taking an “afternoon stroll” at the appointed time and place.

Because of China’s pervasive Internet censorship, few people were likely to know about the campaign. Twitter and Facebook, instrumental in Egypt’s protests, are blocked in China. Tech-savvy Chinese can circumvent controls using proxy servers or other alternatives, but few of the country’s Internet users seek out politically subversive content.

Apparently undeterred, organizers said in an online posting that sustained action was needed to show Beijing that its people expect accountability and transparency absent from the current one-party Communist system.

“We invite every participant to stroll, watch or even just pretend to pass by. As long as you are present, the authoritarian government will be shaking with fear,” said the announcement posted Tuesday on U.S.-based Chinese-language news website Boxun, which is blocked in China.

The source of the online campaign, which first circulated on Boxun, was not known and activists have said they weren’t sure what to make of the call for a “Jasmine Revolution” ― the name given to the Tunisian protest movement. Would-be demonstrators were urged to shout, “We want food, we want work, we want housing, we want fairness” ― a slogan that highlights common complaints among Chinese.

Ahead of the protests this past weekend, human rights groups estimated several dozen to more than 100 activists were detained by police, confined to their homes or were missing.

Several apparently remained in custody Wednesday, including prominent lawyers Jiang Tianyong, Teng Biao and Tang Jitian, and writer Gu Chuan. All of their cell phones were switched off, which is common when activists are taken away by authorities.

Beijing police did not immediately respond to a fax asking whether they had any of the activists in custody.