The government affiliated research institution said its Dokdo programs would include educational workshops, promotional exhibitions, and symposiums that will discuss Japanese history textbooks that do not take into consideration Korea’s stance on Dokdo. 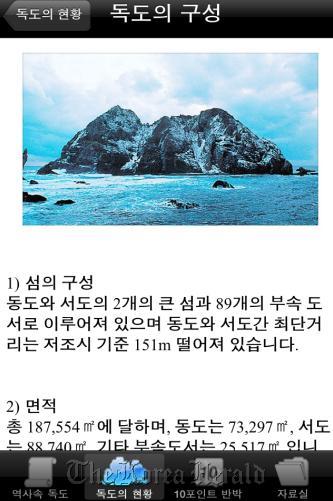 The institution recently released a book about Dokdo, called “Dokdo Can be Seen on Ulleungdo.”

“One Japanese scholar had claimed, before we started working on this book, that Korea did not know about Dokdo’s existence till the early 20th century,” said Hong Seong-geun, one of the officials of the foundation at a press meeting held in Seoul on Tuesday.

“Through our own research, we’ve found out that Dokdo is visible from Ulleungdo, another Korean island which is located only 87.4 kilometers away. This matches Korea’s historical documents that had records about the islets before the 20th century.”

The institution is also working on sub-textbooks about Dokdo for Korea’s elementary and middle school students, while campaigning for the international use of “Dokdo” when referring the islets, instead of the Japanese term “Takeshima.”