Underwood is a name familiar to many Koreans. Horace Underwood came to Korea in 1885 as a missionary, and founded what became Yonsei University.

Peter Underwood is the last member of the clan still here, but after teaching at companies in Korea and Japan he decided in 1985 to buck the family tradition and leave education.

“I decided the company part was more interesting than the teaching part, so that’s why I decided to get my MBA and go into business,” he explained.

Underwood is now senior partner for IRC, a business consultancy that helps foreign companies and others do business in Korea. As part of his work with IRC he also heads the State of Georgia Korea Office, working to attract Korean business to the U.S. state.

Having grown up in Korea, he is fluent in Korean. He says knowing the language is valuable, and it is something he appreciates when he goes abroad.

“Having the language gets you closer to the people, increases understanding, makes life easier ― it’s very frustrating where you go to Thailand or China where you can’t speak the language, especially when you are used to being able to speak it,” he said.

He said more expats are learning Korean these days, but that when he grew up the business community was small and so, except for the military, most Westerners in Korea would speak some Korean. 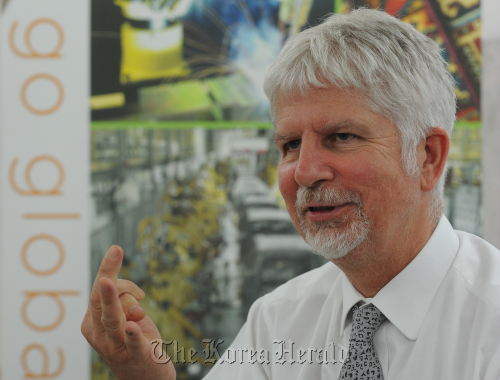 Peter Underwood. (Lee Sang-sub/The Korea Herald)
But at the same time, he says Koreans would generally assume that if a person was white, they were speaking English. He recalls a time in his 20s when he went to a temple, and his father was ahead of him talking to a professor in Korean.

“As we were walking up the hill we passed these two halmoni resting on the side of the road. And I remember one turned to the other and said ‘I don’t know why they say English is so difficult, I understood every word that man was saying.’”

Naturally, he has seen a lot of changes. He remembers being able to walk around the Seokguram Grotto in Gyeongju at sunrise and see the jewel in the Buddha’s forehead spread the light around.

“If you wanted to go in and look at it, you wanted to make a stone rubbing of it, no problem. Now it’s all glassed off and you can’t do it.

“Because Korea is an affluent country, and many more people can afford to go and enjoy these places, you have to have these controls that you didn’t have to have before,” he said. “It’s a good memory to have, but I wouldn’t wish that poverty back on Korea so that only the privileged could go and do that.”

That affluence has seen Korea transform. Underwood remembers food being a daily concern for some families when he was young.

He said that in the 1970s goods were scarce, and the clothes at the market were those rejected by the exporters. But now supply has outstripped demand ― and consumers have become harder to please

“Korean consumers started getting picky, and now they’re some of the pickiest consumers in the world. And you have to respond to that,” he said, pointing to several instances where foreign companies have come unstuck here.

He said learning what reaction to expect was the hardest challenge Westerners faced here. Likening the two cultures to different computer codes, he said it was important to learn how to interpret them.

“There are just fundamentally different expectations of what should be done, what the correct behavior is.

“A lot of business relationships in Korea are colored by that leader-follower concept, whereas in the West we do business because it’s good for both of us,” he said, pointing out that Korea was much more hierarchical.

He added that it was important to get to know staff in Korea in order to get the most out of them, and also to understand the division between social life and private life was much smaller.

“In a Western culture asking too many personal questions of an employee is seen as an invasion of personal space, whereas here it expresses concern for the individual,” he said.

On helping Georgia attract investment, Underwood points to Kia’s factory in West Point as a good example of how things can go right.

He said the state provided training for staff and service to help the Koreans who came adjust.

The project was also fortunate in its timing. While the global financial crisis sparked initial worries, it turned out to be good for the project, as it sparked a trend for more economical cars ― and at a point where one of its big rivals, Toyota, was struggling.

He said that in the late 1990s economic reasons meant that Korean workers in the U.S. would try to stay, because of the economic situation. These days, Korea’s situation is good compared to the U.S. economy and as a rule, Kia workers come back after their stint abroad.

“That’s good too because they go back and they spread the word about Georgia. And recognition of it as a manufacturing base.”

He points out that now Korean firms have a much broader range of activities in Georgia, including food processing, textiles, and software.

“It’s funny that you put in an auto plant and your medical science industry improves,” he says. “But it does, people recognize it’s not just peanuts and cotton.”