PYEONGCHANG, Gangwon Province ― It seemed almost a pipe dream when PyeongChang, a small city in Gangwon Province, first made its name internationally by bidding to host the Winter Olympics.

After nearly a decade of relentless effort, however, PyeongChang, making its third bid to host the Winter Games, came one step closer to making the dream come true.

A panel of the International Olympic Committee praised on Saturday the preparation of PyeongChang’s bid for the 2018 Winter Olympics, after completing its on-site inspection here.

On the final day of their visit, Gunilla Lindberg, the leader of the 14-member IOC evaluation team, said that she was impressed by the “great progress” of the PyeongChang team.

The IOC panel arrived here Monday for an on-site inspection.

During their visit, the IOC team checked PyeongChang’s proposed competition venues including the ski jump, cross country and biathlon venues in Alpensia Resort; snowboard and freestyle ski venues at Bokwang Phoenix Park; and the curling, ice hockey and figure skating venues in Gangneung.

“We have seen great progress in their bid from the two previous bids,” Lindberg said in a news conference at Alpensia Resort in PyeongChang, Gangwon Province, wrapping up their week-long schedule before departing on Sunday. 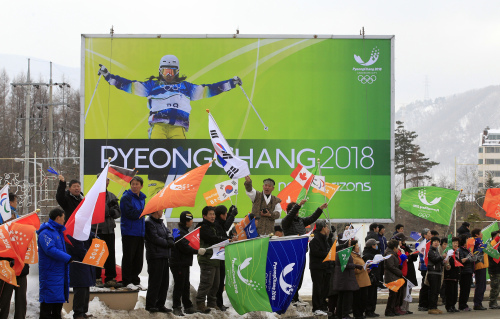 “It has been wonderful to see so many people to show their support to bring the Olympic Movement to Korea.”

She also underlined the strong support of the government, which was exemplified by President Lee Myung-bak and Prime Minister Kim Hwang-sik’s visit during the inspection.

During the delegation’s trip here, thousands of local residents turned out on the streets to greet the special visitors, waving dozens of placards saying “Yes, PyeongChang,” and “PyeongChang 2018,” giving their full commitment to the city’s bid.

The highlight of the IOC panel’s schedule came on the fifth day when the delegates visited Gangneung, approximately a 30-mintue drive from PyeongChang.

When the IOC team walked into the pitch black Gangneung Indoor Ice Rink, music started. Then, the lights slowly came back on, as a choir made up of 2,018 local residents at the stand started to sing together ABBA’s “I Have a Dream.” Underneath, young skaters from some countries where winter sports are not available, including Kenya, Mexico and Indonesia, were skating on the ice.

A bit of an emotional moment for the IOC team, but it was also the moment that PyeongChang’s long-time dream came closer to reality.

Despite the upbeat mood here, Cho Yang-ho, CEO and chairman of PyeongChang’s 2018 bid committee, however, tried not to be overly optimistic.

“The inspection result doesn’t lead to a successful bid,” Cho during the press conference on Saturday.

“I can’t say whether I am now optimistic or pessimistic, because at the end of the day it’s up to the IOC members to make the decision.” Cho said, seemingly in reference to past bids.

But Lee, who is a former head of communications for London’s successful 2012 bid, Rio’s 2016 Olympic bid, and Qatar’s 2022 World Cup, refused to say PyeongChang is the favorite in the race.

“We should remember that you don’t count your chickens before they hatch,” he added.

“Now, all we have to do is try our best until July,” Cho said.

PyeongChang is competing against Munich of Germany and the French town of Annecy for the 2018 Winter Games.

The IOC panel visited Annecy last week, and will now head to Munich after a week-long break to wrap up their tours of the three bidding cities. The IOC members will elect the 2018 host on July 6 in Durban, South Africa.