The Camaro is the third model of the eight Chevrolet vehicles GM Daewoo Auto and Technology Co. plans to introduce to the local market this year as part of its strategy for pushing up domestic market share and to leave behind the less-than-flattering image associated with the Daewoo brand.

With the vehicle, which will go on sale next month, GM Daewoo is hoping to boost its brand image riding on the back of the Camaro’s sporty image. 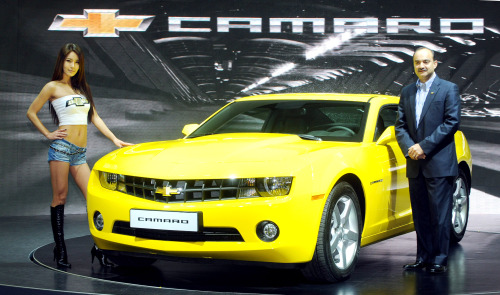 GM Daewoo Auto and Technology Co. vice president for sales Ankush Arora poses with the Camaro at the launch event in Seoulon Friday. (Park Hyun-koo/The Korea Herald)
While the company has tried a similar strategy with the convertible G2X, the local name for the Saturn Sky Red Line, with questionable results, the Camaro has the distinct advantage of being something of a movie star.

Having appeared as the shape-shifting mechanical alien Bumblebee in the two hit “Transformers” movies, the vehicle enjoys significantly larger recognition in the local market than the Saturn sports car.

The latest Camaro, which continues the name that first appeared in 1967, is fitted with a 3.6-liter, V6 direct injection engine that puts out 312 brake horsepower. The vehicle is capable of reaching 100 kilometers per hour from a standing start in 5.9 seconds.

The powerful engine coupled with the vehicle’s 6-speed automatic transmission gives it an official fuel economy figure of 9.1 kilometers per liter.

Against the country’s only other officially marketed muscle car ― the Ford Mustang ― the Camaro appears to be evenly matched.

At 312 bhp, the Camaro’s power output is a step ahead of the Mustang’s 305 brake horsepower generated by its 3.7-liter V6 engine.

In terms of fuel economy, the Mustang has the upper hand but only by 0.1 kilometers per liter.

The Mustang and the Camaro are also similarly matched in terms of safety features, with both vehicles fitted with a range of electronic and conventional safety systems.

The Camaro, however, does have one major disadvantage.

The Chevrolet muscle car comes at a price of 47 million won ($42,000) and at 48 million won for the Bumblebee Package, which has the vehicle decked out to resemble the Camaro as it appeared in the “Transformers” movies.

While GM Daewoo says that the locally marketed Camaro is the 2LT trim, the top of the range model with the 3.6-liter engine that starts at about $27,000 in the U.S., and additional costs such as shipping leave very little profit margin for the company, Ford Sales and Services Korea is said to have no plans to alter the Mustang’s price, boding ill for the similarly equipped Camaro.