Shin Kwang-chul’s thoughts differ a bit from others in supporting Africa, particularly regarding the Ethiopian veterans who fought in the Korean War. For them, it is not all about the money, but regaining the respect they deserve, he says.

“Providing living expenses for them is indeed helpful, yet the most urgent issue is to help them regain respect from their own people,” Shin, general secretary at the Supporters’ Association for the Ethiopian Veterans of the Korean War told The Korea Herald.

According to Shin, Ethiopian veterans of the war have not been hailed by their people. They faced persecution and grief under the communist regime that ran from 1974 to 1991, because they fought against the new government.

“The Korean War veterans  were enlightened with the ideas of capitalism and democracy. They were the ones who fought against the communism’s replacement of capitalism in 1977, which became one of the reasons for their persecution in their country.”

In 1977, then-Emperor Haile Selassie was overthrown by the communist Worker’s Party of Ethiopia, which then set up a single Marxist-Leninist party. The Korean War veterans were blamed for initiating conflict within the country ― by fighting against the new regime.

“Since then, they have been living a life of hell,” Shin told. 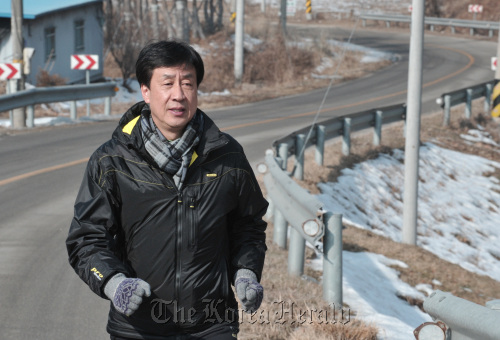 Shin Kwang-chul, general secretary at the Supporters’ Association for Ethiopian Veterans of the Korean War, is shown training for the 72-day-long 1,950-kilometer grand march to support the Ethiopian Korean War veterans in Chuncheon. (Chung Hee-cho/The Korea Herald)
Ethiopia is the only African country to have served in the Korean War, with 6,037 soldiers fighting. Today, only some 500 veterans remain, clustered around the outskirts of the Ethiopian capital, Addis Ababa. After the communist regime took power, the area was dubbed the “Korean Village”.

“Almost all Ethiopians are classified as destitute, but these Korean War veterans became ‘the most destitute’ in the country,” Shin said.

The communist party was expelled by the Ethiopian People’s Revolutionary Democratic Front during a civil war in 1991. However, Shin said the vestiges of oppression remain.

Because of this, most of the veterans’ families still shun appearing in public ― and have avoided the capital ― ever since.

After he discovered the situation, Shin established a supporters association for the Ethiopian veterans to help them gain respect from their country.

Shin initiated a union of 10 international volunteering Chuncheon-region Rotary Clubs in 1995, and has continued to help improve living standards, establishing local plants to help boost the country’s employment, engaging in cultural exchanges, and in supporting education for the veteran’s children.

“They (Ethiopian veterans) told me that they could suffer hunger but no longer the political persecution, and I couldn’t agree more. They deserved more respect then that.”

The association’s core vision is to rebuild the Korean Village, build a memorial hall and a monument for Korean War veterans in Ethiopia, and hold a commemoration ceremony on a regular basis.

With the help from the association, the Ethiopian government decided to reinstate the pension for Korean War veterans ― a step closer to regaining respect from their own people.

“They have been deprived of their homes, pensions, and rights, they have gone through so much to regain democracy in their country,” said Shin.

“The government have finally reintroduced the pension system. This is thanks to the efforts of the Koreans who have visited Ethiopian governments, and who continuously supported them. As a result, they really like Koreans, they even cheer for Korean soccer teams during World Cup events,” he said with excitement.

Shin said that money could only do so much to help the veterans.

“Big companies donating a big chunk of money won’t do,” he said. “It can be helpful, but it has no sincerity.”

This year’s May 6, marks the 60th commemoration day for the Korean War, and Shin said there is good news.

“The Ethiopian president and the defense minister will come out commemorate this day, and we are celebrating this in front of the monument that we helped build, this will bring about big change for the veterans,” he said.

In order to help them build schools and houses, Shin said they are in need of funds ― but he wants the money to be given with a little more “sincerity.”

“I have decided to walk 1,950 kilometers to commemorate the 60th anniversary of the Korean War that began in 1950.”

He is already on his 6th day, at the long march. He said his goal was to raise $50,000 to be used to improve the job education facility for the veterans' families, build an extension to the Dilla Elementary school in southern Ethiopia, and teach Korean.

“Every meter we walk will be worth 10 won in donations, there already has been 20 people, who could not participate, willing to donate 1.95 million won, which covers the entire distance of the walk.

He has started his walk from the Ethiopian Korean War memorial, and will end his walk in Imjin-gak area, the walk will last 78 days covering a region per day. Shin will be accompanied the entire distance by the president of Chuncheon Green industry, Lee Ho-moon.

His 1950 km walk is sponsored by the Foreign Ministry, and the Ministry of Patriots and Veterans affairs, the Korean War commemoration committee, Korea Leisure Marketing, and MBC.

Anyone is invited to come and join the walk, by registering through http://www.myethio.net. The information for donation can be also found through the website.

Shin is also working on seeking on more constructive and steady ways to help Ethiopians, and the establishment of Chuncheon Coffee Theme Park, sell Ethiopia-origin coffee, and the profit from business will be funded to schools, and houses for the Ethiopian Korean War veterans and their families.

“Let’s say there is a friend you lent money long time ago, wouldn’t you be happy to hear that the friend you helped has become successful? I’m sure they are happy to be helped by their successful friend (Korea).”